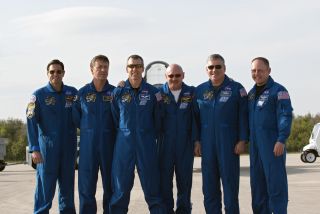 Space shuttle Endeavour's STS-134 crew members pose for a group photo on the Shuttle Landing Facility at NASA's Kennedy Space Center in Florida after arriving on March 29, 2011 to begin final launch training ahead of an April 19 liftoff.
(Image: © NASA/Kim Shiflett)

The six astronauts set to ride the space shuttle Endeavour on its last voyage to space ran through a mock launch countdown today (April 1) for practice.

Endeavour is set to lift off on its final STS-134 mission April 19. It will carry a large astrophysics experiment and a load of spare supplies to the International Space Station.

Today's launch dress rehearsal, called the terminal countdown demonstration test, allowed the astronauts to practice escaping from the orbiter in case of an emergency on the pad before liftoff. [Photos: Shuttle Endeavour's Final Mission]

"My crew and I will get to strap in," Endeavour commander Mark Kelly told reporters after arriving in Florida Monday (March 29). "We practice the launch countdown that day and I know these guys are excited to do this. TCDT, or the terminal countdown demonstration test, is when the processing and the training kind of comes together."

Kelly and the STS-134 crew are at NASA's Kennedy Space Center in Cape Canaveral, Fla., where Endeavour stands ready at Launch Pad 39A for its last blastoff.

"We like coming in to see the space shuttle," Kelly said. "It's always exciting, especially when you're three weeks away from launch."

Today's countdown test was delayed from its scheduled start this morning by storms with strong winds, rain and lightning that kept teams off the launch pad. The rehearsal finally began at 2 p.m. EDT.

In addition to managing the hectic shuttle training schedule, Kelly has been supporting his wife, Congresswoman Gabrielle Giffords, through the difficult process of recovering from a gunshot wound to the head. Giffords, D-Ariz., was shot outside a Tucson grocery store in January during a community outreach event.

Kelly hopes Giffords will be well enough to travel to Florida from her rehabilitation hospital in Houston to see him off later this month. [FAQ: Inside Astronaut Mark Kelly's Shuttle Flight]

"We're still working on plans," Kelly said. "We don't have final approval from her doctors yet, but we are pretty hopeful that she may be able to get down here."