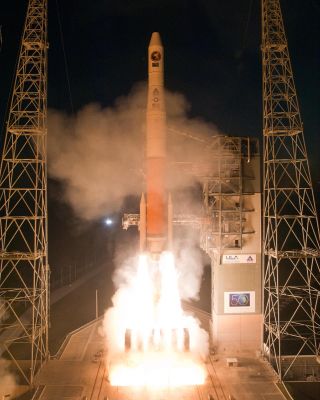 The satellite launched into space atop an unmanned Delta 4 rocket that lifted off from the Cape Canaveral Air Force Station at 6:38 p.m. EST (2338 GMT). High-altitude winds above the Air Force station's Launch Complex 37 delayed the satellite's launch by nearly a half hour, but cleared in time for a dazzling twilight blastoff.

Rocket launch provider United Launch Alliance orchestrated the satellite's trip to orbit for the National Reconnaissance Office. The Chantilly, Va.-based NRO is responsible for the design, construction and operation of the country's network of intelligence-gathering spy satellites.

The new satellite is part of the military's national defense program. Due to the classified nature of the mission, which is formally known as NROL-27, very few additional details about the launch or the satellite's purpose are publicly released. The mission went into a media blackout shortly after its successful liftoff.

"Congratulations to the NRO and to all the mission partners involved in this critical national security launch," Jim Sponnick, ULA's vice president of mission operations, said in a statement. "Our launch team understands the importance that these missions play in protecting our freedoms and supporting our brave men and women deployed around the world."

The liftoff comes less than a week after the U.S. Air Force launched its second secret X-37B space plane on a similarly hush-hush mission. That spacecraft lifted off on March 5 atop an unmanned Atlas 5 rocket, also provided by ULA.

Since September, five different NRO satellites have been launched into orbit, including today's. On Nov. 21, a Delta 4 Heavy booster – the United States' biggest unmanned rocket currently in service –  delivered a huge spy satellite into space. The rocket used in today's launch is considered a medium-class version of the Delta 4 Heavy, officially a Delta 4 M+(4,2), according to Spaceflight Now.

"We have had an amazing five successful launches in the past 12 months, two in 2010 and three this year. I am looking forward to the launch of NROL-34 in April, which will conclude our most aggressive launch schedule in over two decades," Air Force Col. Alan Davis, director of the NRO's Office of Space Launch, after the successful liftoff.

The sixth NRO satellite is slated to launch April 12 on an Atlas 5 rocket out of Vandenberg Air Force Base in California.

A Delta 4 rocket stands 205 feet (62.5 meters) tall and is made up of one main booster with two small solid rocket boosters strapped to its side.

The rocket is built and launched by the United Launch Alliance, a partnership between Lockheed Martin and Boeing. It made its first flight in 2002 and is capable of launching payloads of up to 13.5 tons into low-Earth orbit and 6.6 tons toward the geosynchronous orbits used by communications satellites.

This is the third launch of the year for United Launch Alliance, and the 16th flight of the Delta 4 family of rockets.