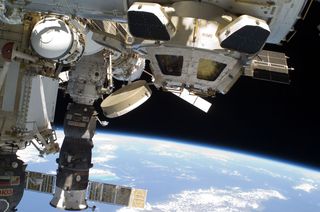 Backdropped by Earth's horizon and the blackness of space, the Cupola of the International Space Station and a docked Russian Progress spacecraft are featured in this image photographed by an Expedition 26 crew member while space shuttle Discovery (STS-133) remains docked with the station on March 2, 2011.
(Image: © NASA)

HOUSTON – The astronauts on NASA's space shuttle Discovery are packing up their spaceship today (March 6) and will soon say farewell to the International Space Station.

The two space crews on Discovery and the space station – 12 astronauts in all – will close the hatches between their two spacecraft later this afternoon after more than a week of joint work to upgrade the orbiting laboratory.

Discovery's crew does have a few last minute cargo items to move, but will then have about four hours of downtime to relax and enjoy their final hours at the orbiting outpost with the station's own six-person Expedition 26 crew. [Photos: Shuttle Discovery's Final Mission]

A farewell ceremony is scheduled to take place at 3:28 p.m. EST (2028 GMT), after which the hatches between Discovery and the station will be closed. Discovery's astronauts will spend the night onboard the shuttle before undocking from the station early tomorrow morning.

The shuttle astronauts delivered a new storage module, critical supplies, and a dexterous humanoid robot called Robonaut 2 to the space station during their time at the orbiting lab. Discovery is due to land at NASA's Kennedy Space Center in Florida on Wednesday, March 9.

Discovery's STS-133 mission is the shuttle's last flight in an illustrious spaceflying career that includes 13 visits to the International Space Station of a total of 39 trips into space. After this mission and 27 years of spaceflight, the shuttle Discovery will be retired from service, as NASA brings its space shuttle program to an end later this year.

"Personally, I've been working on this mission for almost two years now," NASA's space station lead flight director Royce Renfrew said in a briefing yesterday (March 5). "To look at all the hard work that we've done and all the curveballs the vehicle has thrown at us, to take those in stride and execute the mission as designed is just glorious. On the flipside, it is absolutely true this is the last time Discovery will be at ISS, and one of the last shuttle missions we'll ever do to ISS, so that has some bittersweet components to it."

Discovery launched its final flight on Feb. 24, and arrived at the space station two days later. NASA decided to extend the original mission by two days, giving the mission a total of 13 days on orbit. The flight's primary goal is to help outfit the station for the years ahead, when NASA will no longer have the enormous cargo-carrying capability of the space shuttles.