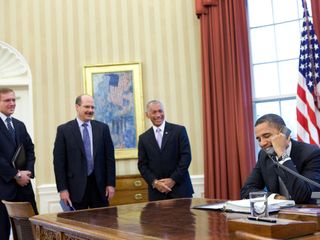 President Barack Obama makes a phone call with the crew of the Space Shuttle Discovery and the International Space Station from the Oval Office, March 3, 2011. Listening in the background are, from left: Ted Wackler, Acting Chief of Staff, Office of Science and Technology; Damon Wells, Assistant Director for Aeronautics and Space, Office of Science and Technology; and NASA Administrator Charles Bolden.
(Image: © Official White House Photo by Samantha Appleton)

Obama spoke with the crews of the linked space station and Discovery as they sailed 226 miles (363 kilometers) above Earth. He was surprised to hear that the astronauts had not yet set free the space station's latest crewmember: the humanoid robot Robonaut 2, or R2 for short.

"I don't know whether you guys are putting R2 to work, but he's getting a lot of attention," Obama said. "That helps inspire some young people when it comes to science and technology." [Video: Astronauts talk to President Obama]

Discovery commander Steve Lindsey said they did move the robot into the space station — they just didn't open its crate.

"He's still in packing foam," Lindsey said. "We hope to get him out shortly. It's going to be fun to see how he works."

Robonaut 2 has been packed away for four months, and sometimes it feels as if the robot is scratching to get out, the astronauts joked.

"C'mon, unpack the guy! He flew all that way and you guys aren't unpacking him?" Obama joked.

Discovery launched on its final mission – STS-133 – on Feb. 24 from NASA's Kennedy Space Center in Florida, and the shuttle docked at the International Space Station two days later. The crew of Discovery is flying a 13-day mission to deliver supplies, a new storage room and Robonaut 2 to the space station.

On a more serious note, Obama told the astronauts that they – and the rest of NASA – are beacons of inspiration for the country.

"I wanted to call and say how personally proud I am of you, and all that you're accomplishing," Obama said. "We're always inspired by the images of you guys at work, as you put the final pieces to make ISS fully operational. You are setting such a great example with your dedication, courage, commitment to exploration. These are traits that built America, and you guys personify them."

Obama's space call came while NASA is at a crossroads of sorts.

The space agency, like all federal agencies, still does not have a final 2011 budget as Congress continues to work under a continuing resolution. President Barack Obama has proposed an $18.7 billion budget for NASA in 2012, one that would keep it locked at 2010 levels. [What Obama and Congress Should Do for Spaceflight]

But Obama did not mention NASA's budget request during his call. Instead, he focused on the current mission, which is the final flight of Discovery as NASA moves closer to retiring its 30-year space shuttle program later this year.

"Colonel Lindsey, it must be a great honor to be the last commander of the Discovery," Obama said. "It's traveled more distance in space and spent more time in orbit than any of its peers in the shuttle fleet. It's appropriate that it's performing this critical and iconic mission and adding to the legacy by working up ISS assembly to full operation."

"On behalf of the crew, it's a privilege to fly Discovery on her final mission," Lindsey replied. "We're calculating that when we land, Discovery will have flown in space for 365 days – a full year – which is pretty incredible for a vehicle. She's been into space 39 times, and that's a pretty incredible record, and she won't be forgotten for a long, long time, we hope."

Only two more flights, the last voyages of the shuttles Endeavour and Atlantis, are planned after this mission.

"I just want to congratulate everybody at NASA, all the personnel past and present, who spent untold efforts in making the space shuttle Discovery a unique part of our history in space," Obama said. "Congratulations to all the other nations that are involved in the ISS. We could not be prouder of what you guys are doing."

Obama also spoke directly to the space station's commander Scott Kelly. Kelly's identical twin brother Mark – also an astronaut and the commander of NASA's next shuttle mission on Endeavour – is married to Arizona congresswoman Gabrielle Giffords, who is recovering from a gunshot wound to the head received during a January shooting in Tucson.

"Scott, I talked to Mark a couple of days ago and it sounds like Gabby's making incredible progress. We're just thrilled for that," Obama said. "They're always in our thoughts and prayers as well. I know that's something that's been a deep concern to you as well, so I just wanted to let you know that."

An international feat in space

Obama also spoke about the significance of all of the vehicles present at the station now – representing four different space agencies: those of Japan, the U.S., Europe and Russia.

"That's a pretty good metaphor of how we need to work together productively in space, and maybe back here on Earth," Obama said.

Discovery is due to undock from the orbiting laboratory on Monday (March 7) and land Wednesday (March 9) at the Kennedy Space Center in Florida.