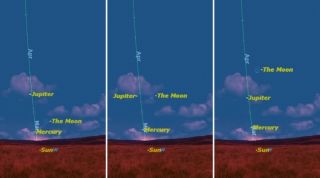 At sunset on March 5, 6, and 7 in 2011, the new moon appears to rise above the horizon relative to planets Mercury and Jupiter. View from Austin, Texas, at local sunset.
(Image: © Starry Night Software)

The moon enters its "new" phase on Friday (March 4), but when can you actually see it?

The new moon, like all four "quarter" events in the lunar month, is an instantaneous event, when the moon lies closest to the line joining the Earth and the sun. This month, the new moon occurs Friday at 3:36 p.m. EST.

But the new moon occurs when the moon is very close to the sun in the sky, making it more of a challenge. To make matters more difficult, the moon at this time is almost completely backlit, with the only light reaching the visible side of the moon being light reflected from the "full Earth" in the moon's sky.

The only time you can actually see the true new moon is during a total eclipse of the sun, when the moon lies directly in the line from the Earth to the sun.

In many of Earth’s cultures, new moon is a very important event, marking the beginning of the lunar month. Since the new moon itself can only rarely be seen at an eclipse, great efforts are made to observe the moon as soon after new as possible.

The moon skywatching map here shows how the sky will appear at sunset on Saturday, Sunday, and Monday (March 5, 6, and 7) this coming week. On Friday night, the moon would be right down on the horizon next to the sun and not visible.

On Saturday night, the moon will be slightly above and to the right of Mercury.

For safety’s sake, wait until the sun is completely below the horizon, then sweep the area just above the set sun to see if you can spot Mercury and, just above and to the right of it, the fingernail sliver of the young moon, only 1 percent illuminated.

This will be a challenging observation but, if you have a clear cloudless sky and a good western horizon, you should be able to spot the moon.

If you fail to observe the moon on Saturday night, you will stand a much better chance on Sunday night. The moon will be much higher above the horizon, the same height as Jupiter, and the crescent will be slightly more lit, 4 percent illuminated.

On Monday night, the moon will be higher still, about 33 degrees above the horizon at sunset, and 9 percent illuminated.

When looking at the young moon with binoculars, pay attention to the part of the moon not in sunlight. It is usually brightly illuminated by the "full Earth" and you can often see the same features as you can observe at full moon except lit by the ghostly light of Earth.

So, how early this coming week can you manage to see the moon?