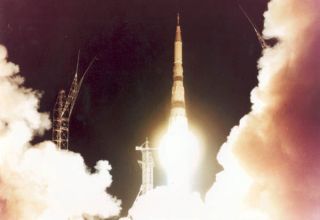 A Soviet N-1 rocket lifts off during one of four failed launch attempts between 1969 and 1972 to test the giant rocket, which was designed to eventually send two cosmonauts to the moon during the Space Race.
(Image: © S.P. Korolev Rocket and Space Corporation “Energia” )

Research that digs back over the decades is providing an illuminating look at the former Soviet Union’s failed bid to send cosmonauts to the moon.

Between February 1969 and November 1972, Soviet space engineers repeatedly saw any dream of landing a cosmonaut on the moon literally go up in flames.

A succession of four failures of the Soviet-built N-1 mega-booster led to the project’s cancellation by decree of the Central Committee of the Communist Party of the Soviet Union.

A fifth launch of the super-booster was slated in the fourth quarter of 1974, one that gleaned lessons learned from the earlier unsuccessful flights.

Up in smoke and millions of rubles spent, the terminated N-1-L3 space project was to be topped by a lunar system to support a two-cosmonaut crew on a maximum flight time of 13 days to the moon and back to Earth, with one crew member setting foot upon the lunar surface.

For years, Charles Vick, senior technical and policy analyst at GlobalSecurity.org, has been doggedly poring over on declassified files, talking with Soviet space program pioneers and culling through their memoirs and diaries.

In Vick’s latest unmasking of the N-1-L3 studies, he’s added new insight to his take on the Soviet manned lunar programs. He’s looking at it from both American and Russian perspectives, using satellite reconnaissance imagery — albeit purposely downgraded in clarity — and data from open sources.

“I would suggest that the race was far closer than publically perceived, based on declassified intelligence all the way back before Sputnik,” Vick said. “It was the Soviet system that ultimately defeated itself in the lunar race,” Vick told SPACE.com.

A host of U.S. intelligence gathering groups, from the Central Intelligence Agency, National Security Agency, the Office of Naval Intelligence and others, still hold tight what was gleaned by various satellites — as well as on-the-ground spies.

“That is an amazing story to be told … that hasn’t been told,” Vick said. Factory floor spies, even intelligence-gathering, down-range moles, he said.

In relation to N-1 launches, the U.S. also tapped into seismic sensors and atmospheric capabilities, even listening in on countdown demonstrations and in-flight telemetry streams transmitted during booster flights.

“It was intelligence in one form or another,” Vick said. “We could really feel for what was going on. We were able to do it a lot more than most people realized…it creates one huge picture.”

Just how much the U.S. intelligence community knew, assimilated and wrote about — and to what degree they agreed upon between various factions — the Soviet work on their moon rocket remains an enigma, Vick said.

Terming it a “historic bottleneck,” Vick is adamant about pushing for declassification of the last of the Keyhole (KH-7) satellite imagery from 1966-1967 and still classified KH-8 and KH-9 imagery — something he said, is not likely to happen unless forced to occur by presidential executive order.

“Trying to get stuff declassified today, it’s like I’m taking their marbles away…and it’s over 40 years old,” Vick said. He’s also on the hunt for Defense Meteorological Satellite Program imagery from July 3, 1969, that purportedly caught the flash from an N-1 booster exploding, annihilating the rocket and launch tower.

The power of groups stamping Top Secret-Sensitive Compartmentalized Information (TS-SCI) on what is openly known after more than four decades “is childish to say the least,” Vick said.

“I think in spite of limits from one U.S. president to the next, they were exceptionally and responsibly well-informed to a depth that is unimaginable to the average citizen… but how much is documented on that is unclear, but getting clearer,” Vick said. “However, even then there were strong buffers deciding what the president needed to know.”

Race to the Moon

Adding his scholarly voice to the U.S.-Soviet Union contest to the moon is John Logsdon, professor emeritus of political science and international affairs at George Washington University’s Elliott School of International Affairs in Washington, D.C.

Logsdon’s new book, “John F. Kennedy and the Race to the Moon” (Palgrave Macmillan), yields insightful looks at the 1961-1963 period when the United States was basically racing against itself.

Although the Soviet leadership approved the development of the N-1 booster in June 1960, the decision to use the huge booster for a lunar landing mission did not come until 1964, Logsdon advised SPACE.com:

“U.S. intelligence estimates at the time of JFK’s 1961 decision to go to the moon and for the following two years told the White House that although sending people to the moon was very likely part of Soviet space plans, there was no physical indication that preparations for a lunar mission competitive with the U.S. end-of-the-decade schedule were under way.”

Logsdon said that, knowing the United States was in the lead in preparing to go to the moon, “may have been one of the reasons President Kennedy offered in a Sept. 20, 1963, speech at the United Nations to turn Apollo into a U.S.-Soviet cooperative undertaking.”

Proud as a people

“They have not told the world and their own people all that went on,” Vick responded, “with important historic events never revealed or detailed as to the hardware, the missions, their intents and other issues.”

That being the case, Vick said the Russian government, industry and its military owes the Russian people more of their history. They can be proud as a people for trying to accomplish the goals, he added, despite the government system they found themselves under.

Backed up by his investigation, Vick said that the Soviet authoritarian system was not the moon project’s downfall. Rather, fierce arguments within design bureaus, the pressure of trying to meet an out-of-reach deadline for geopolitical reasons, as well as the need for personnel, talent and money for other Soviet missile and space projects and facilities – all of this conspired to not get the job done.

The behemoth rocket’s first stage grew to a 30-engine affair — not static fired on the ground as was done on all of the other booster stages, Vick said.

“Look at the national treasure they put into this project and then threw it away,” he added, likening it to what the U.S. did with tossing away the Saturn V booster that hurled the Apollo program into the history books.

Those engaged in the Soviet bid to get to the moon should be very proud, Vick said. “The erector transporter, then erecting a Saturn V-class vehicle from horizontal to vertical,” he said. “That is something else!”

Vick believes that Soviet engineers were close to taming their huge moon rocket. “They were essentially ready to go and really do it, in unmanned form and then fly it manned.”

According to the website of the S.P. Korolev Rocket and Space Corporation “Energia,” the work on the moon booster was not in vain. It was used in the follow-up Energia rocket initiative, but at great expense.

“Although the experience gained in designing and manufacturing, operating and ensuring reliability of the powerful rocket system N-1 has been employed in full measure in developing LV Energia and is likely to find wide application in future projects,” the website added, “it is impossible not to admit that cutting down of work on N-1 was a mistake.”