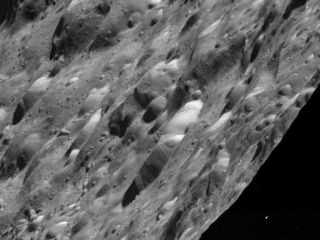 Saturn's cratered moon Rhea is revealed in this photo from NASA's Cassini spacecraft, taken during its closest flyby of the moon Jan. 11, 2011.
(Image: © NASA/JPL/SSI)

The battered and pockmarked surface of Saturn's moon Rhea was revealed by NASA's Cassini spacecraft, which made its closest flyby of the moon this week.

Rhea, an icy moon, is second largest satellite around Saturn. The Cassini probe passed within about 43 miles (69 kilometers) of Rhea's surface on Tuesday (Jan. 11).

Cassini has been studying Saturn and its rings and moons from orbit since it arrived at the gas giant in 2004. But its latest views of Rhea are the best so far.

Saturn's moon Rhea is about 949 miles (1,528 km) wide and is tidally locked, meaning that it always presents the same face toward Saturn as it orbits the ringed planet.

Even though Rhea is Saturn's second largest moon, it is still less than one-third the size of the planet's biggest satellite, Titan.

Rhea was discovered in 1672 by Giovanni Cassini, the Italian astronomer after whom NASA's Cassini spacecraft is named.

Here's a look at some of best raw snapshots from the Cassini's spacecraft's latest Rhea flyby:

This image shows Rhea in center stage, with Saturn's rings and three other moons in the background. Dione appears just above Rhea, with Tethys as the larger circle toward the upper left, and Epimetheus as the smaller dot to the left of Rhea. Credit: NASA/JPL/SSI

This picture reveals a close-up of Rhea's surface, scarred by many craters and several long, cross-cutting faults. Credit: NASA/JPL/SSI

NASA launced the Cassini spacecraft in 1997 and it arrived at Saturn in 2004. It has been imaging Saturn ever since. The flight has been extended twice since completing its original mission in 2008. Cassini is currently expected to continue studying Saturn, as well as its moons and rings, through at least 2017.