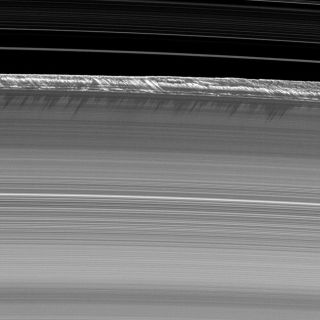 Vertical structures, among the tallest seen in Saturn's main rings, rise abruptly from the edge of Saturn's B ring to cast long shadows in this image, taken by NASA's Cassini spacecraft two weeks before the planet's August 2009 equinox.
(Image: © NASA/JPL-Caltech/SSI [Full Story])

The dazzling rings of Saturn spontaneously shake and shimmy, and a new study suggests that the principle behind the movement is also at work in the spiral arms of the whole galaxy.

Researchers analyzing images from NASA's Cassini spacecraft in orbit around Saturn have found that the odd oscillations in the planet's massive B ring aren't caused by moons or any other bodies.

Instead, the ring is dense enough, and its edges are sharp enough, for unforced "free" waves to grow on their own and then reflect back again at the edge, scientists say. [New photo of Saturn's B ring.]

Researchers think this behavior is common in other disk systems, such as spiral galaxies including our own Milky Way, and in protoplanetary disks found around nearby stars.

While the phenomenon has been modeled in computer simulations, it had never been observed in nature ? until now.

"We have found what we hoped we'd find when we set out on this journey with Cassini nearly 13 years ago: visibility into the mechanisms that have sculpted not only Saturn's rings, but celestial disks of a far grander scale, from solar systems, like our own, all the way to the giant spiral galaxies," said Carolyn Porco of the Space Science Institute in Boulder, Colo., a study co-author and leader of the Cassini imaging team.

The new observations could help explain the bewildering variety of structures seen throughout the densest regions of Saturn's rings, according to the study appearing today (Nov. 1) in the online version of Astrophysical Journal.

Scientists have known since the early 1980s, when NASA's Voyager spacecraft flew by Saturn, that the outer edge of the planet's B ring was sculpted into a rotating, flattened-football shape. The strongest gravitational resonance in Saturn's rings is caused by the planet's moon Mimas.

Resonances in Saturn's rings occur where the relative orbital positions between ring particles and a moon continually repeat, altering the particles' orbits. In the case of the Mimas resonance, the particle orbits are changed from circles to ellipses that form a two-lobed pattern rotating with Mimas.

But it was clear, even in Voyager's findings, that the outer B ring's behavior was far more complex than anything Mimas alone could cause, researchers said.

Now, analysis of thousands of Cassini images of the B ring edge, taken over the course of four years, has revealed the source of most of the complexity: the presence of at least three additional, independently rotating wave patterns, or oscillations.

These oscillations have spontaneously arisen as a result of the B ring's density and its crisp edges, which allow wave patterns to form and bounce around, researchers said.

"These oscillations exist for the same reason that guitar strings have natural modes of oscillation, which can be excited when plucked or otherwise disturbed," said Joseph Spitale of the Space Science Institute, the study's lead author and a member of the Cassini imaging team. "The ring, too, has its own natural oscillation frequencies, and that's what we're observing."

Astronomers believe that such self-excited oscillations exist in other, distant disk systems. However, motions within these remote systems cannot be directly observed, and researchers have instead resorted to computer simulations to study them.

Now that has changed.

The new observations confirm the first large-scale wave oscillations of this type in a broad disk of material anywhere in nature, researchers said.

This same process might explain all the puzzling chaotic waveforms found in Saturn's densest rings, from tens of meters up to hundreds of kilometers wide.

"Normally viscosity, or resistance to flow, damps waves, the way sound waves traveling through the air would die out," said Peter Goldreich, a planetary ring theorist at the California Institute of Technology in Pasadena, who was not involved in the study.

"But the new findings show that, in the densest parts of Saturn's rings, viscosity actually amplifies waves, explaining mysterious grooves first seen in images taken by the Voyager spacecraft," he added.

Images of the B ring's outer edge also have revealed at least two perturbed regions, one of them a long arc of narrow shadow-casting peaks extending as high as 2.2 miles (3.5 km) above the ring plane.

The study suggests that these regions are likely populated by small moons that may have migrated across the outer part of the B ring sometime in the past, eventually becoming trapped near the edge in a zone affected by the gravity of Mimas. Such a process is commonly thought to have helped configure the present-day solar system, researchers said.

Spitale and Porco propose that these regions very likely contain small moons, hundreds of meters to possibly a kilometer or more across, that dramatically compress and force upward the ring material passing around them in this agitated environment at the B ring's edge.

The authors also theorize that the outer part of the B ring may, at one time, have been populated by a collection of small bodies, in the same way Saturn's outer A ring today is home to dozens of moonlets that create the "propeller" features recently discovered by Cassini.