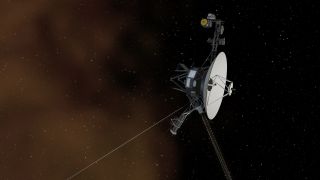 NASA's Voyager 2 probe will have to fend for itself in interstellar space for the next 11 months or so.

NASA is upgrading the 230-foot-wide (70 meters) radio dish in Australia that mission team members use to send commands to Voyager 2, which launched in 1977 and entered interstellar space in November 2018. Voyager 2 will be on its own until that work is done in January 2021, though the spacecraft will still be able to beam science data home.

But don't worry too much about Voyager 2; it should be able to handle its extended isolation, mission team members said.

"We put the spacecraft back into a state where it will be just fine, assuming that everything goes normally with it during the time that the antenna is down," Voyager project manager Suzanne Dodd, who also serves as director of the Interplanetary Network Directorate at NASA's Jet Propulsion Laboratory in Pasadena, California, said in a statement Wednesday (March 4).

"If things don't go normally — which is always a possibility, especially with an aging spacecraft — then the onboard fault protection that's there can handle the situation," Dodd added.

The Australian radio dish is part of the Deep Space Network (DSN), the system NASA uses to communicate with its many space probes. There are three DSN sites — one each in California, Spain and Australia.

Each site has multiple big antennas. For example, the Australian complex, which lies about 25 miles (40 kilometers) southwest of Canberra, also features three 111-foot-wide (34 m) radio dishes. The 111-footers can receive science data, but only the 230-foot one has the special transmitter required to beam commands to Voyager 2, NASA officials said.

The California and Spain DSN sites are no help in this regard, either. Voyager 2, which is currently more than 11 billion miles (17 billion kilometers) from Earth, is moving downward relative to our planet's orbital plane and, therefore, can be hailed only from the Southern Hemisphere.

The big Australian dish has been operating for 48 years and needs the upgrade, NASA officials said. The agency decided to start the work now — the upgrade is scheduled to begin "in early March," according to the Wednesday NASA statement — because Voyager 2 recently bounced back from a glitch and is healthy again, the officials added.

"Obviously, the 11 months of repairs puts more constraints on the other DSN sites," Jeff Berner, the Deep Space Network's chief engineer, said in the same statement. "But the advantage is that when we come back, the Canberra antenna will be much more reliable."

The upgrade will improve communications with many NASA spacecraft, not just Voyager 2, agency officials said. For example, the work will benefit NASA's Mars 2020 rover, which is scheduled to launch this summer, and the agency's Artemis program of crewed lunar exploration, which aims to land two astronauts near the moon's south pole in 2024.

Voyager 2 and its twin, Voyager 1, launched a few weeks apart in 1977 to perform an unprecedented "grand tour" of the solar system's giant planets — Jupiter, Saturn, Uranus and Neptune. The duo aced this task and then kept on flying, all the way out to interstellar space.

Voyager 1 reached this exploration frontier in August 2012, becoming the first human-made object ever to leave the heliosphere, the big bubble of magnetic fields and charged particles that the sun blows around itself. Voyager 2 followed about six years later.