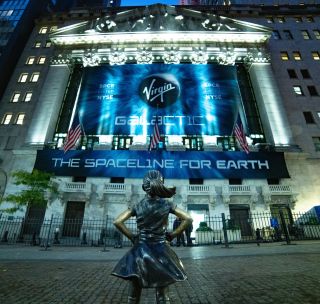 Virgin Galactic was founded in 2004 by British billionaire Sir Richard Branson to fly passengers on suborbital trips to space (they don't orbit the Earth) a half-dozen at a time. The company's SpaceShipTwo passenger spaceliner and its carrier plane WhiteKnightTwo are based on a smaller scale version (SpaceShipOne and WhiteKnight), which were developed by the aerospace company Scaled Composites and won the $10 million Ansari X Prize for a crewed suborbital and reusable spaceflight in 2004.

"To fellow investors, employees of VG and The Spaceship Company, business partners and customers – thank you for your commitment to our great company, which has made today’s exciting announcement possible," Branson said in a statement Friday (Oct. 25).

SpaceShipTwo vehicles are built by The Spaceship Company (part of Virgin Galactic) and are designed to launch six passengers and two pilots into suborbital space from midair, detaching from a WhiteKnightTwo mothership high above Spaceport America in New Mexico and rocketing upward. (Virgin Galactic recently opened its "Gateway to Space" terminal at Spaceport America and will operate out of the spaceport.)

After a few minutes of weightlessness, the spacecraft reenters Earth's atmosphere and glides back to the ground for a runway landings. Tickets currently go for $250,000 per seat, with passenger flights expected to begin in 2020.

Richard Branson celebrates the first day of trading for the world’s first and only publicly listed human spaceflight company. A milestone that puts @VirginGalactic on a clear path towards starting commercial service. https://t.co/He3wLykt61 @NYSE @richardbranson pic.twitter.com/4PIbOYg2C5October 28, 2019

To date, Virgin Galactic has launched two spaceflights (in December 2018 and February 2019) using its SpaceShipTwo called VSS Unity. The company's test flight program was delayed due to a fatal accident in 2014, which killed one pilot, injured another and destroyed the first SpaceShipTwo VSS Enterprise. The company developed new safety and training measures to avoid the pilot error that caused that accident to occur again.

As of today, Virgin Galactic has 600 reservations by eager passengers in 60 different countries waiting for their first trip into space. Earlier this month, Virgin Galactic unveiled the spacesuits and other gear, developed by Under Armour, passengers would receive as part of their flight.

"I am proud of the strong flow of customer deposits and interest we have earned to date, and look forward to making the dream of spaceflight come true for our amazing astronaut customers," Whitesides said in Friday's statement.

The merger between Virgin Galactic and Social Capital Hedosophia (SCH), valued at $1.5 billion, was announced in July.  SCH founder and CEO Chamath Palihapitiya is investing another $100 million in the new venture and will serve as chairman of its board.

“Since our founding, SCH set out to unite technologists, entrepreneurs and technology-oriented investors around a shared vision," Palihapitiya said in the Friday statement.

SCH and Palihapitiya are not the only ones putting new money into Virgin Galactic. On Oct. 8, the U.S. aerospace juggernaut Boeing announced it is investing $20 million in the company in anticipation of a passenger spaceflight boom in upcoming years. The two companies may also collaborate on projects with the spacecraft.

"Our work with Virgin Galactic and others will help unlock the future of space travel and high-speed mobility," Brian Schettler, senior managing director of Boeing HorizonX Ventures, said in a statement at the time.