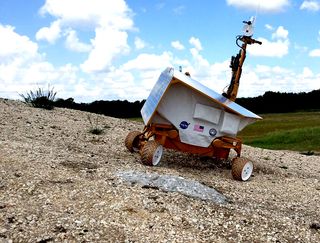 A prototype Resource Prospector lunar rover in testing before the project was canceled in April 2018 as part of NASA's renewed focus on the moon.
(Image: © NASA)

NASA is already pulling together plans for what could become its first long-lived robotic rover on the moon's surface, designed to sniff out water and targeting a landing date of 2022.

Right now, that rover, called Volatiles Investigation Polar Exploration Rover (VIPER), is still a mission concept. If all goes well, the project could develop a long-lived, mobile robot that can hunt for water and other volatiles near the south pole of the moon. And VIPER has a head start, since the would-be mission builds on previous NASA development conducted as part of a project called Resource Prospector, which was axed in 2018. This time around, the rover would reflect the Artemis program, NASA's initiative to land humans on the moon in 2024.

"We are heavily ensconced in the intersection between science and exploration," Brad Bailey, program scientist with NASA's Lunar Discovery and Exploration Program, said about NASA's lunar program during a Planetary Science Advisory Committee meeting held in Washington, D.C., on Sept. 23. Volatiles are an area of particular overlap between the two programs, hence VIPER's relevance to both.

Related: Water Ice Confirmed on the Surface of the Moon for the 1st Time!

On the science side, understanding how water arrived at our closest neighbor would explain how Earth got its own water, even though plate tectonics has destroyed the geologic record of that era. Would-be explorers are on the hunt for fuel or even drinking water they could generate from stores of ice.

But in both cases, the first step is figuring out where the water is — and that's what VIPER is designed to do, not only at the south pole, where it would land, but over the entire lunar surface. "The idea is that that mission is a very important part of looking for volatiles, looking for these potential resources on the lunar surface," Debra Needham, a planetary scientist at NASA’s Marshall Space Flight Center, told Space.com. "It's a highly desired mission under formulation."

Scientists have confirmed the existence of sizable chunks of frozen water on the moon only over the past decade. But as it stands right now, NASA's last soft-landed mission to the moon was Apollo 17 in 1972, when humans last set foot on the moon. The agency has also only flown lunar rovers designed to work with humans, during the latter three Apollo missions. These rovers carried some instruments but primarily served as transportation devices for astronauts.

That means that although VIPER won't necessarily be the first mission to land in NASA's new, moon-focused Artemis era, it could be NASA's first lunar rover in decades and the agency's first independent rover ever.

The combination means that there are plenty of new capabilities NASA wants to build into such a mission. A particularly high priority for the agency is to design a rover that can power through the dramatic temperature swings between night and day. A couple of long-duration lunar rovers — the Soviet Union's Lunokhod 2 and the Chinese Yutu rovers — have slept through the night, woken up and resumed work.

But NASA wants to do something more: The agency wants VIPER and other future missions to keep gathering data through the night, without shutting down for safety. "One of the biggest technologies that needs to be developed is being able to survive and operate through the lunar night," Needham said.

Working through the night would double the amount of observations a rover could make in the same mission duration, which is of course appealing. But full-time observing would also offer crucial science data about phenomena that aren't observable during the lunar day. In particular, Needham said, scientists think that at dawn and dusk, dust may levitate and electrical currents could form in the lunar surface.

VIPER would let engineers test technologies designed to let lunar rovers work through the night, but it wouldn't tackle those specific science measurements. Instead, according to Bailey's presentation last month, there are four primary instruments that NASA is eyeing for VIPER.

Two of those instruments were under development for Resource Prospector; NASA also included both in a list of a dozen instruments selected in February to land on the moon as early as this year. (Bailey said they are scheduled to fly on board Astrobotic's lunar lander, which is due to fly in the summer of 2021.)

A third instrument NASA is eyeing for VIPER is a drill designed to reach about 3 feet (1 meter) into the lunar regolith.

Scientists have glimpsed below the moon's surface before: Astronauts on the later Apollo missions also carried a drill, and they returned subsurface samples to Earth. But volatiles literally get their name from their ability to easily evaporate away, so scientists can't be sure what volatiles disappeared from the subsurface moon rocks they have examined up close with modern technology.

VIPER would change that, as both NIRVSS and a second instrument, called Mass Spectrometer observing lunar operations (MSolo), which can analyze isotopes, will conduct their analyses not only while the rover is moving but also on material that the drill pulls to the surface.

NASA also wants to make sure that the findings of a mission like VIPER could stretch far beyond the small patch of lunar surface that the rover itself would explore. In particular, the agency wants to work with the U.S. Geological Survey to establish how to apply the rover's local findings to orbital data about the rest of the lunar surface, Jay Jenkins, program executive for exploration at NASA's Science Mission Directorate, said during a panel about NASA's commercial partnerships for lunar science at a symposium held by NASA in Huntsville, Alabama, on Sept. 12.

After all, although the south pole's apparent ice cache is particularly intriguing to scientists and would-be explorers, it isn't the only water on the moon. "Ultimately, we really are trying to ground-truth all of the orbital data that we have, in terms of volatile, extent, composition, forms, etcetera," Bailey said during the advisory committee meeting.

Both Bailey and Jenkins said that NASA is hoping to launch VIPER in late 2022. "It's a very aggressive schedule," Jenkins said.

But that sort of timeline wouldn't be completely unprecedented, he added, pointing to NASA's Lunar Crater Observation and Sensing Satellite, or LCROSS, which he said was designed, built and executed within two years. (According to a NASA website for the mission, LCROSS was selected in April 2006; the flight concluded in October 2009. That would make for a slightly more generous timeline than VIPER would have if it hits its launch target.)

LCROSS is nothing if not a success story when it comes to understanding moon water. The mission, which launched with NASA's Lunar Reconnaissance Orbiter, watched a rocket stage crash into the moon and studied the debris — until its own equally violent demise. The LCROSS data showed that its impact location is twice as wet as the Sahara Desert.