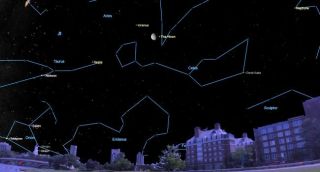 Today (Aug. 21), just before dawn, the waning gibbous moon will sit bright in the southern sky near the frigid, blue-green planet Uranus.

That planet will be faint, but skywatchers will be able to spot it with the naked eye just under 5 degrees above (to the celestial north of) the star Xi Ceti, which is located in the constellation Cetus. Skywatchers can find the moon, which will be larger than semicircle third-quarter moon but smaller than the full moon, located 6.5 degrees to the lower right (the celestial southwest) of Uranus.

The waning gibbous moon follows August's Sturgeon Moon. This full moon's name, which appears in the Old Farmer's Almanac, derives from both colonists and Algonquian-speaking tribes in North America, as sturgeon are native to both Europe and the Americas.

Unfortunately for skywatchers keen on spotting our blue, far-off planetary neighbor, Uranus is tricky to spot even on a clear, dark night. With the bright moon still fairly large in the sky, skywatchers might want to grab a pair of binoculars or (more likely) a telescope to actually see the planet, according to earthsky.org.

The moon and Uranus will be visible at night both tonight and tomorrow (Aug. 22), but they will be low in the sky at night and will be easier to spot in the predawn hours, EarthSky said.

Tonight and throughout late August and early September, skywatchers will also be able to spot the Great Square of Pegasus, a constellation that is, unsurprisingly, a big square. This constellation is a great skywatching tool because, in addition to being an easy-to-identify shape, it points to Messier 31, or the Andromeda galaxy, in the night sky.

To find the Andromeda galaxy, first "locate the Great Square of Pegasus in your eastern sky," Earthsky said. "But instead of thinking of the Great Square as a square, think of it as a baseball diamond. Now, imagine the farthest star to the left — Alpheratz — as the third-base star. A line drawn from the first-base star through Alpheratz points in the general direction of the Andromeda galaxy."