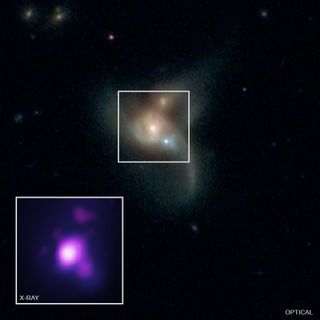 Take three of the most massive objects in the universe, smoosh them and their surrounding galaxies together, and the fireworks are sure to be astounding — and maybe, someday, scientists will see the collision.

That day hasn't come quite yet. But now, astronomers have come close, spotting what may be the run-up to such a massive merger: Three galaxies, each likely hiding a supermassive black hole at their heart, are all on a collision course that could help scientists understand why the universe looks the way it does.

"Because these systems are so rare, we don't actually know very much about them as a population, which is why it's important to find more of them," Ryan Pfeifle, lead author of new research describing the finding and a doctoral student in astronomy at George Mason University, told Space.com. "If we can find more we can study them as a population and say, 'OK, in general this is what these systems tend to behave like.'"

Merging black holes may sound like old news, but this event is nothing like the collisions that scientists have "heard" through gravitational waves in only the past few years. These signals are produced by collisions of black holes that may each be at most a couple of dozen times the mass of our sun, like two droplets effortlessly merging on a rain jacket.

Each of the supermassive black holes involved in the new research contains the mass of hundreds of millions of suns and is surrounded by entire galaxies of stars and planets and moons. Their collision would be like two raging rivers breaking through a dam and reshaping the landscape with floods. Such an event would create gravitational waves, but of such incredible length that modern detectors simply can't sense them.

But it's these sorts of interactions that astronomers believe are crucial for making the universe into what it looks like today, studded with mysterious supermassive black holes. "No one really knows how they can get so massive pretty early in the history of the universe," Shobita Satyapal, Pfeifle's advisor and co-author and an astrophysicist at George Mason University, told Space.com. "One of the most compelling mechanisms where they can grow rapidly is through these galaxy mergers."

So, the researchers wanted to try to spot such a merger before it happened. Volunteer data analysts had flagged a collection of targets based on measurements of infrared light as potential locations where two mature galaxies were colliding.

The team behind the new research gathered additional observations of these places using NASA's Chandra X-ray Observatory. The scientists hoped that the additional data would reveal a supermassive black hole feasting on matter and spitting out X-rays at the heart of each galaxy in these merging pairs. Keying into X-rays is important, since these objects are swathed in clouds of dust and gas that block other types of light.

Anyway, Pfeifle joined the project to analyze the Chandra observations of the Triple and other potential mergers. The first time he looked through the Triple data, it looked just as promising as the other potential duos. It was only when he revisited the data that he realized something was different.

"When I had just looked at the X-ray image, I hadn't actually realized that they were three X-ray sources just because I was a naive young graduate student," Pfeifle said. But then he added optical data about the area as well. "When I lined it up, suddenly things clicked and I said, 'Oh, wait a second, that's something fishy going on there.'" The result was a two-year obsession to determine whether there really were three merging supermassive black hole galaxies.

(The Triple has caught other researchers' eyes as well. A separate team of scientists have also concluded that the Triple is likely three colliding supermassive black hole galaxies, based on some overlapping and some unique data. Those researchers posted their analysis to the pre-print server arXiv.org in July, and declined an interview with Space.com at the time because it was under peer review for publication. "They arrived at a similar conclusion," Satyapal said, who added that their team began writing up their results in February. "It's nice to see that there's corroboration.")

The Pfeifle and Satyapal's research posits that the Triple is three galaxies perhaps colliding — although they could simply graze each other, not close enough to sink into a final spiral. If it is a true merger, the scientists can't be sure quite how far along the massive collision might be, although from start to finish such a merger likely takes about a million years.

Right now, the galaxies are between 11,000 and 23,800 light-years apart from each other. One of the trio definitely hides a feeding supermassive black hole at its center; the other two seem to as well, but do not show the same telltale signal as the first, the researchers said.

Counterintuitively, systems like the Triple may be more informative than the pairs that the team were actually hunting. Two-part mergers can crawl along, taking longer than the universe's lifespan to join, but the presence of a third galaxy seems likely to nudge the collision along, judging by simulations scientists have run of such events.

Those simulations also suggest what could become of the Triple if its galaxies do someday collide. "There would still be a galaxy, sort of this trainwreck initially," Satyapal said. The dynamics of a collision can warp individual galaxies that may have begun, say, as delicately structured swirls of stars like our own Milky Way, into something beyond recognition.

"We think that these mergers, they don't just grow the black hole, but they actually transform a disk galaxy into a giant elliptical galaxies," Satyapal said. "You just have a big ball of stars with an enormous black hole."

The research is described in a paper posted on Aug. 7 to the preprint server arXiv.org and accepted for publication in The Astrophysical Journal.