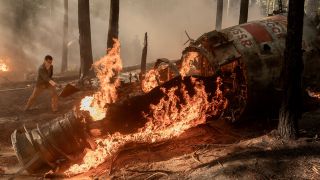 AMC's "The Walking Dead" launched its 10th season last week to the delight of zombie fans everywhere, but the premiere also contained a space junk Easter egg that just might be a major plot point for the series: a Soviet satellite crashing to Earth.

The episode "Lines We Cross" ends with an old Soviet satellite crashing to Earth as a brilliant daytime fireball. It loses unmistakable sonic booms and a sparks wildfire in enemy territory (watch out for Whisperers!) that the show's heroes must battle to save their hunting grounds.

"We'd been talking the the writers' room about what are different things that happen the more time goes on," executive producer Angela Kang said in AMC's "Talking Dead" recap of the Oct. 6 premiere. "We thought that it would just be like an interesting thing that we haven't dealt with before, and then see what things they can get from the satellite in terms of technology or to help them."

Related: The Biggest Spacecraft to Fall Uncontrolled from Space
More: Failed 1970s Venus Probe Could Crash to Earth This Year

According to Kang, "The Walking Dead" showrunners sought advice on satellites from a NASA scientists at the Jet Propulsion Laboratory in Pasadena, California.

That got us wondering how accurate the satellite crash depiction was, so we reached out to astrophysicist Jonathan McDowell at the Harvard–Smithsonian Center for Astrophysics in Cambridge, Mass. who tracks satellites and space junk in Earth orbit.

Our first question: How accurate is the fireball, sonic boom and crash, which leaves much of the satellite intact?

"The visual of the reentry ... is good, although it looks too high at that point to have audible sonic booms, I would guess. Overall, not bad as a depiction," McDowell told Space.com in an email. "The almost-intact satellite found on the ground ... is not plausible."

The appearance of "The Walking Dead" satellite resembles a type of old Soviet surveillance satellite known as a Tselina-R, which was used for electronic intelligence, McDowell said. That might just be a coincidence, though.

According to Russian spaceflight expert Anatoly Zak, who runs Russianspaceweb.com, Tselina-R launched in 1990 (before the end of the Soviet Union) and was designed to last about six months. But Tselina-class satellites were launched throughout the late 1960s, 70s, 80s and 90s, with the last to fly in the early 2000s.

Next question: Is 10 years in "The Walking Dead" (that's my estimate based on the show's seasons) enough time for satellites to fall from space?

"The 10 years is enough if the satellite were in a relatively low orbit of say 500 km," McDowell said. "It'd be unlikely to have a jet-engine-size bit surviving unless it was actually designed for reentry (like a camera/film capsule)."

Some Soviet satellites like that depicted in "The Walking Dead" have had small engine parts, like a meter-sized plate or quarter-meter spherical pressure tank, survive, but nothing the size of what appears in the show, McDowell added.

"Maybe you'd get a piece that big from a space station module."

Here's a follow-up: The folks in "The Walking Dead" rush to the Soviet satellite to put out a wildfire, then rush to salvage any technology they can. Wouldn't there be toxic hydrazine or other chemicals to worry about? And would anything be salvageable at all?

"It's unlikely there'd be anything usable surviving — I don't think anything from Skylab survived in repairable condition for example," McDowell said. "Again, if [it were] part of a system designed for reentry, that's a different story, so you could imagine a cargo ship ([SpaceX's] Dragon, for example) that boosted its recovery module in the wrong direction and was stranded in orbit for reentry 10 years later —  but it wouldn't look like that."

And McDowell suggests there might be more to worry about than just toxic hydrazine, a fuel used for spacecraft thrusters.

"The concern with hydrazine is valid but maybe brief — it would probably dissipate pretty quickly. I would certainly be hesitant about approaching the thing when not wearing a protective hazmat suit," McDowell said. "There might be potentially explosive hypergolic propellant on board too. And on an old Soviet sat there might be high-explosive self destruct devices."

Okay, last question: Do you watch "The Walking Dead"?

"I'm not a big zombie fan, 'Walking Dead' is too gross for me," said McDowell, though he did enjoy the TV series "iZombie."

McDowell also enjoy another show about the dead walking the Earth, HBO's "Dead Like Me," which began with Russia's Mir space station falling to Earth and its toilet seat killing the show's lead character.

"I was a fan of 'Dead Like Me,' indeed," McDowell said, "and appreciated the (again, implausible) Mir toilet seat."