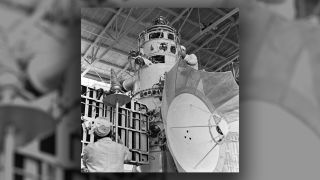 A failed Soviet Venus probe similar to that of Venera 8 seen here will slam into Earth's atmosphere some time in 2019.
(Image: © Alamy)

Here's another warning about incoming space hardware — but this saga has an interplanetary connection.

First, we have to peel back space history to the early 1970s, just after the height of the Cold War space-race between the Soviet Union and the United States.

The Soviet Union launched the Cosmos 482 Venus probe on March 31, 1972. But the spacecraft messed up its rocket-powered escape to that cloud-veiled world and got trapped in Earth orbit. [The 10 Weirdest Facts About Venus]

A big chunk of that failed craft remains in orbit today as space junk — but it's due to come down soon, perhaps as early as this year, experts said.

Cosmos 482 was a sister probe to Venera 8,which in July 1972 became the  second craft to land successfully on the surface of Venus, said Don Mitchell, who studies Soviet space history and has a keen interest in that country's Venus exploration missions.

Venera 8 relayed data from Venus' surface for 50 minutes and 11 seconds before succumbing to the harsh, lead-melting conditions.

But Cosmos 482 got stranded in an Earth parking orbit, Mitchell told Space.com. Some hardware from that failed flight — a heavy frame of tanks and equipment that was jettisoned — fell into  Earth's atmosphere in rather short order. But some remained aloft.

Venera 8 comprised a spacecraft "bus" and a lander probe. The lander was a spherical pressure vessel of similar design to the Soviet Union's Venera 7 probe.

Venera 7 launched in August 1970 and made the first-ever successful Venus landing on Dec. 15 of that year. It sent valuable data back to Earth from the surface, if only for a few brief minutes.

Still adrift around Earth, making one lap every 112 minutes, is the wayward Cosmos 482 Venus entry capsule, a contraption built to withstand the heat  of diving into that cloud-veiled planet's thick atmosphere. The errant Venus lander mass is 1,091 lbs. (495 kilograms) and carries significant thermal protection.

And this piece of space junk will likely survive its inevitable descent back to its home planet, experts said.

"Yes, the descent craft will survive a re-entry with no problems," said satellite watcher Thomas Dorman of the northeastern Oklahoma community of Zeb. "It would be funny if it was spotted coming down and the parachute has deployed … but I am sure the batteries to fire the pyrotechnics to release the parachute have died long ago!"

Like Dorman, veteran astrophotographer Ralf Vandebergh of the Netherlands has been observing the wayward spacecraft for a while — the last eight years, in fact. He told Space.com he's done a new appraisal of Cosmos 482.

"My preliminary conclusion of Cosmos 482, observing using a 10-inch aperture telescope during varying passes, viewing angles, illumination angles and observing conditions, [is that it] seems [to be] an elongated object with strong brightness variations," Vandebergh reported. "There is an indication of smaller structures, but these are unconfirmed. Despite the successful results, the mystery around the true condition of Cosmos 482 and what elements of the spacecraft exactly are still in orbit still remains unsolved."

Meanwhile, Dorman recently captured Cosmos 482 on his skywatching equipment. His imagery showed the object flaring. A spherical object such as the Venus descent capsule seemingly wouldn't flare, he said, suggesting that more of the upper spacecraft bus was still intact. [Space Junk Clean Up: 7 Wild Ways to Destroy Orbital Debris]

"Our guess is maybe as much as 40 to 50 percent of the upper spacecraft bus may still be there," Dorman told Space.com. "It is interesting to note the apogee of the orbit is slowly starting to decay. My guess right now is that re-entry is late this year to mid next year. But predicting its decay is as much of an art [as] it is science. The other issue is, nobody can forecast solar activity for the next year, which could affect the decay time," he said.

"Trying to study Cosmos 482 and what remains of the spacecraft is like attempting to gain an understanding and insight of a shipwreck that is moving at hypervelocity speeds, under ever-changing lighting conditions from the surface of an ocean…this ocean being several hundred miles deep, with only a few seconds to see it at its closest and at best a few times a year!"

Another rough estimate suggests that what's left of the failed Venus probe might stay up for another 2.5 years, even with such a low perigee.

"This suggests the object is very dense, which could support that it might withstand re-entry," said T.S. Kelso of CelesTrak, an analytical group that keeps an eye on Earth-orbiting objects.

You can see  Vandebergh's latest view of Cosmos 482 here.

Leonard David is author of the forthcoming book, "Moon Rush: The New Space Race" to be published by National Geographic in May 2019. A longtime writer for Space.com, David has been reporting on the space industry for more than five decades. Follow us on Twitter @Spacedotcom or Facebook. This version of the story published on Space.com.