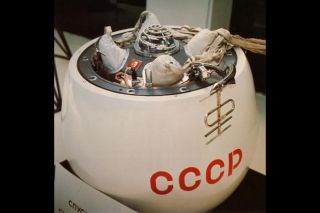 Forty-five years ago today (Aug. 17), the then-Soviet Union launched Venera 7, a spacecraft that would eventually become the first probe ever to send data from the surface of Venus, if only for a few brief minutes.

According to NASA, Venera 7 launched into space from what is now Baikonur Cosmodrome in Kazakhstan at 1:38 a.m. EDT (0538 GMT), aboard a modified SS-6 rocket. The Soviet Union also launched a second Venus probe in August 1970, but that mission failed to leave Earth orbit. [Venus: 10 Weird Facts]

Unlike its partner, Venera 7 did successfully fire its escape-stage rocket engine to begin the nearly four-month cruise to Venus. The probe reached Venus in December of 1970 and made its historic landing on the planet on Dec. 15 of that year.

Venera 7 was designed to enter the atmosphere of Venus, deploy a parachute to slow its fall toward the surface. But, the parachute ripped and collapsed during the descent, leaving Venera 7 in freefall for 29 minutes before it slammed into the Venusian surface. At the time, the probe appeared to stop sending signals, but alas it survived for less than a half-hour.

"Later analysis of the recorded radio signals revealed that the probe had survived the impact and continued transmitting a weak signal for another 23 minutes," NASA's National Space Science Data Center record states. "It is believed that the spacecraft may have bounced upon impact and come to rest on its side, so the antenna was not pointed towards Earth."

So what did Venera 7 say from the surface of Venus?

The probe was able to send data on the temperature of Venus (a mind-boggling 887 degrees Fahrenheit or 475 degrees Celsius), the atmospheric pressure (92 bar) and a wind speed of 2.5 meters per second (nearly 5.6 mph or 9 km/h).

So while Venera 7 may not have made the soft landing Soviet scientists hoped it would, it did send at least some data on what the surface of Venus was like and set the stage for even more ambitious missions like Venera 13, which landed on Venus on March 1, 1982 to snap the first color pictures of the planet from its surface.