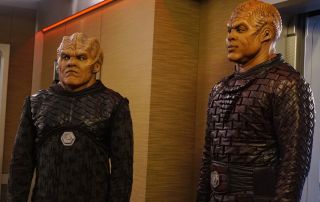 Chad L. Coleman as Klyden and guest star Kevin Daniels as a visiting Moclan engineer, Locar, in the episode "Deflectors" of "The Orville."
(Image: © Michael Becker/Fox)

Following a one-week hiatus, an awesome, fun-filled, action-packed episode of "The Orville" would've been a treat for fans when it returned to our screens last night. Instead, however, it was — as they say in "Mad Max: Fury Road" — mediocre.

Entitled "Deflectors," this was the third episode this season — out of just seven — to focus heavily on Moclan culture. Thankfully, though, the primary plot also revolved around Lt. Talla Keyali (Jessica Szohr), the replacement Xelayan and newest addition to the crew who we were first introduced to in "All the World Is Birthday Cake" (S02, E05). ['The Orville' Actor Mark Jackson Teases Season 2 Revelations About Isaac]

Sitting in a streetside café in a holosuite simulation of 1940s America, Cmdr. Kelly Grayson (Adrianne Palicki) breaks up with her beau, Cassius (Chris Johnson), in a move that just about everyone in the Alpha Quadrant saw coming, except poor Cassius. How else could the unresolved sexual tension between Grayson and Capt. Ed Mercer (Seth MacFarlane) continue?

Meanwhile, an acclaimed Moclan engineer named Locar (Kevin Daniels) comes on board the Orville to help modify the deflector shields. It turns out that he's also an ex-boyfriend of Lt. Cmdr. Bortus (Peter Macon), which causes a little friction between him and his mate, Klyden (Chad L. Coleman).

During a simulated attack with a Moclan cruiser aimed to test the effectiveness of the new shields, Locar seems to have some natural chemistry with Keyali. She thinks nothing of it since the Moclan race, and therefore Moclan romance, is (almost) entirely male — even reproduction occurs between two males — until she returns to her quarters after her shift has finished to find him there.

Locar tells her that he is actually attracted to females, something that does occasionally happen to a Moclan male, but it is forbidden on his homeworld and he will be persecuted should this secret ever be known. Keyali is understanding and sympathetic; she takes him to the 1940s America holosuite simulation that Grayson was enjoying earlier, where she teaches him to dance. Inevitably, they kiss.

As is usually the way, both in real life and on TV, this tender moment is interrupted by a call for Keyali to deal with a minor security situation — a talking, triffid-like "gift" from Cassius needs to be removed from Grayson's quarters. Locar waits patiently for her return, but when the door to the holosuite opens, a mysterious figure enters and disintegrates Locar with a blaster weapon.

Needless to say, everyone is a bit shaken and a murder investigation begins. During a briefing with the Orville command crew, Keyali explains that Locar had expressed feelings for her, but this is dismissed by the captain of the Moclan cruiser as absolute nonsense.

Keyali insists on leading the investigation and has an emotionally charged confrontation with Bortus. The episode actually improves from this point as it tackles the issue of being gay in an unforgiving environment from a flipped perspective. Bortus himself has more of an open mind than most Moclans — and in particular his mate, Klyden — as a result of the issues they faced when their child was born female in the excellent Season 1 episode "About A Girl" (S01, E03). However, he also knows that any opinion outside the norm will result in upset and upheaval, especially since Klyden has very strong views that are in line with traditional Moclan culture.

LaMarr and Isaac finish piecing together the digital clues from the holosuite to reveal that it was in fact Klyden who had murdered Locar. [Biggest Space Movies to Watch in 2019]

Turns out that long before this incident, Bortus knew that Locar had feelings for people of female gender, but chose to say nothing. Klyden, on the other hand, did not know, and he'd been following Locar around the Orville — more as the jealous lover than anything else — and had accidently stumbled on Locar's secret. He confronted Locar and threatened to expose him.

Despite Klyden having both the method and the motive, LaMarr isn't entirely convinced, suggesting that the digital playback was almost too easy to piece together. This leads Keyali to deduce that Locar had faked his own death, using Klyden's vehement sexist views as a way to frame him for the murder. Her suspicions turn out to be correct, and she finds Locar hiding in a shuttlecraft in the landing bay.

We learn that suicide on Moclus shames the family of the deceased, hence the attempted fake murder. Keyali suggests that Locar request asylum on the Orville, but with somewhat unconvincing reasoning he chooses to return to the Moclan homeworld and face his fate rather than hide any further.

Unfortunately, you have to wait until just a few minutes from the end to once again glimpse "The Orville" at its best, with the most powerful scenes in this episode.

In the briefing room Klyden expresses his thanks to Keyali for clearing his name and says he owes her a debt of gratitude. "You want to repay me?" she says. "Here's how. When you see me in the corridor, walk the other way. Locar didn't hurt you, he didn't hurt anyone. All he wanted was love and yet, because of you, his life is over. For no reason except your own prejudice."

He walks out without saying a word and the scene cuts to a handcuffed Locar being escorted from a courtroom on Moclus to be locked away, accompanied by "The White Cliffs of Dover" by Glenn Miller playing softly in the background. Released during World War II in 1941, the lyrics are about looking forward to peace and the end of war. This nicely ties together both the holosuite scene in the beginning of the episode and of course the lyrics themselves.

Despite the moving finale, this episode feels like a lull in "The Orville." Moclan culture has now been thoroughly explored; it's time to let another life-form have more screen time. Given what  Jackson said in a recent interview with Space.com, we very much hope the pace will pick up soon.

"We've got a couple of two-parters coming up and they are epic. We have huge space battles coming up as well," Jackson said.

Indeed, according to Jackson, future episodes promise a deeper look into Isaac's past. "You're gonna see his backstory," Jackson said. "You are gonna find out how he got his name, actually. And it wasn't how I thought he got his name. So that was interesting."

Season 2 of "The Orville" is on Thursdays at 9 p.m. ET on Fox in the U.S. It can be watched on demand on Fox Now and Hulu. It's also available on Fox.com in the U.S. In the U.K., it's on Thursdays at 9 p.m. GMT on Fox. The first season of "The Orville" is available to buy on DVD and a season pass can also be purchased from Amazon.