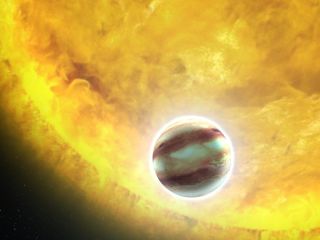 Giant alien worlds known as hot Jupiters, with searing, close orbits to their host stars, can inflate like balloons. Now, astronomers have discovered a hot Jupiter so puffy that it is one of the least dense planets ever found, the researchers reported in a new study.

In the past three decades, astronomers have confirmed the existence of more than 4,000 worlds outside of Earth's solar system. Scientists found that some of these exoplanets are very different from those seen in Earth's solar system; for example, researchers have found hot Jupiters, gas giants that orbit their stars closer than Mercury does the sun.

Previous research showed that a number of hot Jupiters were unusually large but not especially massive, suggesting that they had inflated, perhaps due to heat from their stars. However, "it has not yet been understood why some hot Jupiters are so inflated," lead author of the new study Luigi Mancini, at the Max Planck Institute for Astronomy in Heidelberg, Germany, told Space.com.

"There's probably a list of 20 or so theories for the physics behind the inflation of these planets, such as tidal effects or strong electric currents," study co-author Gaspar Bakos, an astrophysicist at Princeton University, told Space.com. "It hasn't been figured out yet — inflating a planet that big is not easy."

Now, scientists have discovered a highly inflated hot Jupiter, "a very low-density planet," Bakos said. "The hope is that the more of these inflated planets we find, the more we understand why and how they are inflated."

The researchers focused on a planet orbiting WASP-174, a yellow-white dwarf star about 1.25 times the mass of our sun and 1.35 times the sun's diameter. This 2.2-billion-year-old star is located about 1,325 light-years from Earth.

Previous research spotted a giant planet that orbited at a distance of just 5.5% of an astronomical unit (AU) around this star. (One AU is the average distance between Earth and the sun, which is about 93 million miles, or 150 million kilometers.) This hot Jupiter, dubbed WASP-174b, seemed to be at most 1.3 times the mass of Jupiter, but estimates of its diameter ranged anywhere from 70% to 170% that of Jupiter.

To shed light on WASP-174b, the scientists in the new study analyzed data gathered by ground-based telescopes stretching across the Southern Hemisphere, plus the orbiting Transiting Exoplanet Survey Satellite (TESS).

The scientists pinned down WASP-174b's diameter at more than 1.4 times that of Jupiter, meaning the planet is highly inflated. With a density of just 8.4 lbs. per cubic foot (0.135 grams per cubic centimeter), about the same density as light balsa wood, WASP-174b is among the least dense planets ever discovered.

WASP-174b's highly inflated nature might make it an ideal subject for scientists to analyze an exoplanetary atmosphere, compared to less puffy targets that are smaller and harder to see, Bakos said.

"There will be future studies trying to detect what molecules make up its atmosphere," Bakos said. "The better we characterize these inflated planets, the more data points we will have to create a consistent theory for why they exist."

The research is described in a paper that was accepted for publication in the journal Astronomy & Astrophysics and that was posted to the preprint server arXiv.org on Sept. 18.