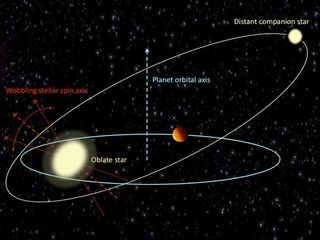 Giant alien planets known as "hot Jupiters" can induce wobbles in their parent stars that may lead to the wild, close orbits seen by astronomers. This diagram shows the relationship between wobbling stars and the orbital tilt of hot Jupiter planets.
(Image: © Cornell University/N.Storch, K.Anderson, D.Lai)

Giant alien planets known as "hot Jupiters" orbit their stars much closer than Mercury does the sun. But the mystery of the origins of hot Jupiters deepened when astronomers recently discovered the scorching orbits of these worlds are often bizarrely skewed, tilted when compared with the equators of their stars.

Now, scientists might have solved the mystery behind why hot Jupiters have such weird orbits— as these giant worlds drew close to their stars, they may have forced the stars to wobble chaotically.

Hot Jupiters are gas giant planets, much like Saturn or Jupiter, that orbit extraordinarily close to their stars, at about one-tenth of the distance from Mercury to the sun. About 1 percent of sunlike stars host these roaster planets. [The Strangest Alien Planets We Know]

Astronomers first discovered hot Jupiters about 20 years, and they are some of the alien worlds that scientists have seen most often since then. That's because the size and proximity of these giant exoplanets to their parent stars mean they exert large gravitational tugs on their hosts that researchers can readily spot.

Prior studies found that hot Jupiters could not have originated where they are currently found, since interference from the gravity and radiation of their stars would have destroyed any gas giants attempting to form that close. Instead, scientists have suggested that hot Jupiters were initially born farther away from their stars and later migrated inward, due perhaps to gravitational tugs from companion stars to their host stars located a few hundred astronomical units (AU) away. An astronomical unit is the average distance between the sun and Earth, about 93 million miles (150 million kilometers).

These scorching, tilted orbits might result from the way hot Jupiters cause their stars to dance chaotically as the planets migrate inward, scientists believe.

"We call hot Jupiters giant planets, but they're very small compared to their stars, about a thousand times less mass, so it's quite surprising such planets can cause such dramatic changes to their star's spin," said study co-author Dong Lai, an astrophysicist at Cornell University in Ithaca, New York.

When a star and its planets are born from a spinning disk of gas and dust, they all generally rotate the same way, and the orbits of the planets all line up with the star's equator. If a star is in a binary system, the gravitational influence of a companion star can make a planet migrate inward.

In computer simulations involving planets with a range of masses and stars with a variety of rates of spin, the scientists found that as a planet comes near its host star, it can make the star's axis of spin wobble in a complex and even unpredictable way. "We didn't anticipate this chaotic behavior," Lai told Space.com.

The way the poles of spin of these stars can sway chaotically "is similar to other chaotic phenomena found in nature, such as weather and climate, where the outcome may depend sensitively on the initial conditions, the so-called 'butterfly effect,'" Lai said. "You also see chaotic behavior in the direction of the axis of rotation of Mars. The way Mars' axis of spin has wandered over time has had a huge impact on the climate of Mars."

Lai and graduate students Natalia Storch and Kassandra Anderson detailed their findings in the Sept. 12 issue of the journal Science.