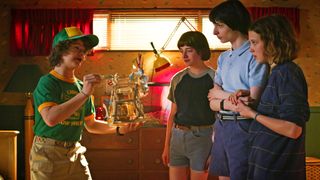 A scene from the Netflix series "Stranger Things."
(Image: © Netflix)

Season 3 of the Netflix hit series "Stranger Things" continues to prove the show's appreciation for science, giving a staple of quantum mechanics an important cameo.

Much like the "X-Files," "Stranger Things" is teeming with government conspiracies, secret experiments, terrifying supernatural forces and shadowy agencies, but also packs in plenty of '80s nostalgia.

In the latest installment, we find our heroes trying to save the world from ending again. But this time, the one thing that can help them stop the creature trying to destroy everyone and everything they care about is not Eleven, a young girl whose telekinetic powers accidentally opened the door to the Upside Down, and her supernatural powers — it's Planck's constant.

Putting the "quanta" in quantum mechanics

Named for physicist Max Planck, this fundamental physical constant links the amount of energy carried by a photon with its frequency. Currently, scientists calculate Planck's constant to be 6.62607015 x 10^(-34) joule-seconds.

Planck identified his game-changing constant in 1900, essentially putting the "quanta" in quantum mechanics, by describing how the tiniest bits of matter release energy in discrete bundles called quanta. In other words, energy transfers occur in set amounts, rather than continuous flows. And at any given wavelength, there was the smallest amount of light that could possibly exist.

Planck figured this out by measuring heat radiation given off by vibrating atoms. To do so, he had to cheat a bit and assume that atoms could vibrate only at certain frequencies, which happen to be whole-number multiples of some base frequency, which he called h. That meant atoms could vibrate at frequency h, or 2h, or 3h, but not 2.5h. That turns out to be because you couldn't make half a photon; you could only make whole numbers of photons.

That h value is now called Planck's constant, and scientists can multiply it by the frequency of a wave to determine its overall energy. Recognizing that relationship led to the rise of quantum mechanics.

So how does this relate to "Stranger Things?"

On the show, which is set in the 1980s, two of the characters infiltrate a secret Russian base located deep beneath the local mall. Inside the base is a safe that contains the keys needed to close the gate to the Upside Down — a sinister, parallel world that mirrors our own — and defeat the nefarious creature trying to destroy their town.

In the first season, American scientists from the fictional Hawkins National Laboratory unintentionally opened the gate when their research subject, a child with psychokinetic powers named Eleven, accidentally made interdimensional contact with one of the inhabitants.

At the end of Season 2, Eleven shut the gate and seemingly thwarted the creature's plan of world domination. However, in the newest season, we learn that the Russians have infiltrated Hawkins with plans to reopen the portal to the Upside Down.

Here's where Planck's constant comes in: the code needed to access the keys is none other than the famous constant. But in the era before Google, who can actually recite it?

The first character to try sure can't. "I suppose it could be wrong," he said after offering incorrect digits. "The code is a number, a famous number — Planck's constant — I thought I knew it."

Luckily, another character can save the day, reciting Planck's constant as 6.62607004. The safe opens.

Related: As Seen on TV: These Commercials Were Filmed in Space!

But apparently scientists at the National Institute of Standards and Technology watch the show, and they noticed that this value is not exactly correct. The show is set in 1985, but the safe opens to the value established for Planck's constant in 2014.

Wait, what? How can a constant change?

As science and technology advances so does our ability to take better measurements, which is the case with Planck's constant. The "true" value of the constant has never changed; what has changed is our ability to measure it accurately.

The number was updated again in 2018, as part of the effort to redefine the International System of Units, according to the National Institute of Standards and Technology's website. In another change, the system sought to connect the pesky kilogram to a fundamental constant.

For more than a century, the kilogram had a very simple definition: the mass of a specific silver chunk of platinum-iridium alloy known as the International Prototype Kilogram, or IPK. Affectionately dubbed Le Grand K, the metallic hunk was the kilogram against which all other kilograms were measured. Kept under glass at the International Bureau of Weights and Measures in Sèvres, France, the IPK has many copies around the world that were used to calibrate the world's scales, ensuring one unified system of measurement.

There was just one issue: If the cylinder's mass changed, even the slightest bit, then the entire global system of measurement had to change, too. (Which it did, by about 50 micrograms, or the equivalent of an eyelash, over about a century.) To mitigate this, scientists around the world collectively decided that the standard of measure should instead be tied to a universal constant.

When Albert Einstein discovered that energy and mass are related, determining exactly how much energy is in that unit could permit scientists to define mass in terms of Planck's constant. In May, scientists made it official, bidding goodbye to Le Grand K.