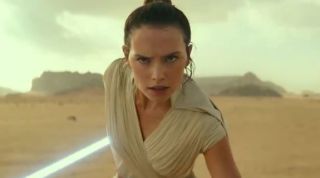 Daisy Ridley as Rey in "Star Wars: The Rise of Skywalker."
(Image: © LucasFilm)

They'll be more "Star Wars "movies and TV shows in the future, but Disney wants fans to think of "The Rise of Skywalker" as the "Endgame" of all the films that came before.

A "look back at Star Wars' impact on pop culture over four decades of storytelling" aired during the American Music Awards (AMAS) on Sunday (Nov. 24). Check out the trip down memory hyperspace below.

"Star Wars: The Rise of Skywalker" is due out in theaters Dec. 20.