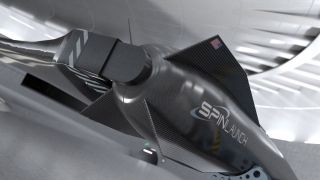 The secretive startup SpinLaunch, which aims to fling satellites into space without a traditional launch pad, has just secured its first launch contract.

In a statement today (June 19), SpinLaunch announced that it has received a "launch prototype contract" from the U.S. Department of Defense under a deal arranged by the Defense Innovation Unit. The Long Beach, California-based company aims to launch its first test flights in early 2020 from Spaceport America in New Mexico.

SpinLaunch is developing a "kinetic energy-based launch system" that accelerates a small payload-carrying booster to hypersonic speeds with a spinning system on the ground. A chemical rocket would kick in once the payload has been launched from the ground system.

An illustration released with the announcement depicted a SpinLaunch booster attached to the arm of what appeared to be a centrifuge.

"SpinLaunch is reimagining space launch by revisiting fundamental physics and leveraging proven industrial technologies to create a system that accelerates the launch vehicle to hypersonic speeds using ground-based energy," SpinLaunch representatives wrote in today's announcement. "Applying the initial performance boost from a terrestrial-based launch platform will enable the company to provide a substantially lower cost launch to orbit, multiple times per day, with no negative impact on our environment."

Entrepreneur Jonathan Yaney founded SpinLaunch in 2014 with the goal of developing a low-cost launch system. The company has said in the past that it hopes to be able to launch small payloads up to five times a day for $250,000 per flight.

In the statement today, Yaney said SpinLaunch would fill the gap between "bulk" carrying commercial launch vehicles (which carry many satellites at once) and "niche" services that are aimed at a specific orbit.

"SpinLaunch fills this gap by providing dedicated orbital launch with high frequency at a magnitude lower cost than any current 'niche' launch system," Yaney said. "This will truly be a disruptive enabler for the emerging commercial space industry. There is a promising market surge in the demand for LEO constellations of inexpensive small satellites for disaster monitoring, weather, reconnaissance, communications and other services."

SpinLaunch received $40 million in Series A investment in 2018, with some funding provided by Airbus Ventures, GV (formerly Google Ventures) and Kleiner Perkins. In May 2019, the company broke ground on a $7 million launch site at Spaceport America.

After a series of test flights in 2020, SpinLaunch aims to begin commercial launch operations in 2022, the company has said.