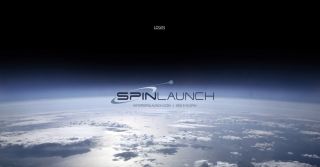 A company that aims to change the way small satellites get to orbit has secured $40 million to continue developing its technology.

"SpinLaunch has the potential to be highly disruptive for launching small and medium sized payloads and is uniquely positioned against traditional rocket-based methods for space launch," GV partner Shaun Maguire said in a statement. "The company's cost-effective approach will enable the expansion of space-based telecommunications constellations in a way that has never been possible before."

The details of that approach remain mysterious; SpinLaunch has been in stealth mode since its 2015 founding. (The company's website requires a login.) But the basics involve accelerating "the launch vehicle to hypersonic speeds using ground-based electricity," SpinLaunch CEO Jonathan Yaney said in the same statement.

"Applying the initial performance boost from a terrestrial-based launch platform enables us to lower the cost by orders of magnitude and launch many times per day," he added.

Yaney declined to speak with Space.com for this story. But he did grant an interview to TechCrunch several months ago. During that discussion, he described SpinLaunch's concept as a "rotational acceleration method" that harnesses angular momentum (which makes sense, given the startup's name). Yaney also told TechCrunch that SpinLaunch is aiming for a per-launch price below $500,000, which would be much lower than a launch with the cheapest rockets.

In yesterday's statement, SpinLaunch representatives said they're targeting 2022 as a first-launch date. The company has not yet chosen a launch site; it's considering locales in four different U.S. states.

Series A funding, by the way, is the round of financing that follows initial "seed capital." A $35 million haul in this round is impressive but not unprecedented. For example, in December, the Japanese company ispace announced that it had pulled in $90 million in Series A money to help develop its robotic lunar-transportation architecture.