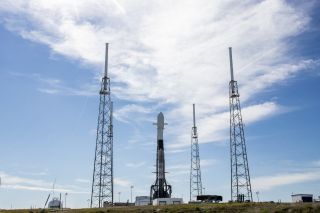 CAPE CANAVERAL, Fla. — SpaceX has postponed the launch of its next batch of Starlink satellites due to bad weather at the mission's launch site today (Jan. 27). The next attempt will be on Tuesday (Jan. 28), the company said.

The California-based spaceflight company was scheduled to launch 60 of its internet-beaming satellites at 9:49 a.m. EST (1449 GMT) today from Space Launch Complex 40 at Cape Canaveral Air Force Station in Florida. However, high winds at the launch site prompted the delay.

You'll be able to watch SpaceX's Starlink launch here on Space.com, courtesy of SpaceX, beginning about 15 minutes before liftoff, courtesy of a SpaceX webcast. You can also watch that webcast directly from SpaceX here.

Poor weather conditions have plagued both the launch site and the recovery zone for several days. SpaceX completed its prelaunch testing for this mission last week, but had to work around the weather in determining a launch day.

This will be the third launch of the year for SpaceX. The star of this mission is a veteran flyer with two successful missions under its belt. The rocket, dubbed B1051.3 (an internal SpaceX identifier), previously hoisted a Crew Dragon capsule as part of the company's uncrewed mission to the space station (Demo-1) in March 2019 as well as a trio of Earth-observing satellites for Canada in June 2019.

Tucked in the rocket's nose cone is SpaceX's fourth round of Starlink satellites, which are designed to provide global internet access.

The company launched its first group of 60 in May 2019, followed by an additional 60 in November and another 60 earlier this month. SpaceX plans for its burgeoning constellation to eventually number more than 40,000 satellites. And if all goes as planned on Tuesday, the launch will bring the current number of satellites to more than 200.

Musk has said that SpaceX will need at least 400 Starlink satellites in orbit for "minor" broadband coverage and 800 for "moderate" coverage. The company claims it could begin offering broadband service in the United States sometime in 2020 with roughly half a dozen more launches.

For tomorrow's mission, SpaceX will also attempt its 49th recovery of a Falcon 9's first-stage booster, as the private spaceflight company plans to land the equipment on its drone ship Of Course I Still Love You.

The company will also attempt to catch both halves of the rocket's payload fairing using a pair of recovery vessels — Ms. Tree and Ms. Chief — outfitted with giant nets and stationed in the Atlantic Ocean.