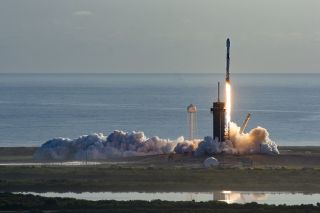 SpaceX's next batch of Starlink internet satellites will get off the ground a day earlier than we'd thought.

"With a more favorable weather forecast for launch and landing, now targeting Wednesday, April 22 at 3:37 p.m. EDT [1937 GMT] for this week’s Falcon 9 Starlink mission," the company said via Twitter this afternoon.

As that tweet notes, SpaceX will attempt to land the first stage of the Falcon 9 rocket that lofts the Starlink satellites. That booster already has considerable experience going up and coming down; it has flown three space missions to date.

You can watch all the action live here and on the Space.com homepage when the time comes, courtesy of SpaceX, or directly via the company. SpaceX's webcasts typically begin about 15 minutes before launch.

With a more favorable weather forecast for launch and landing, now targeting Wednesday, April 22 at 3:37 p.m. EDT for this week’s Falcon 9 Starlink missionApril 20, 2020

Wednesday's launch will be the seventh 60-satellite Starlink liftoff for SpaceX to date. And many more such missions are coming in the near future, if all goes according to plan: SpaceX has approval to loft 12,000 Starlink satellites to low Earth orbit and has sought permission for up to 30,000 additional craft.

The Starlink constellation is designed to provide fast and cost-effective internet service to people around the world. The network is on track to be up and running before the end of 2020, SpaceX representatives have said.