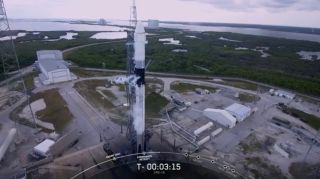 SpaceX's Falcon 9 rocket and Dragon cargo capsule stand poised to launch toward the International Space Station on July 24, 2019. The launch attempt was nixed because of bad weather.
(Image: © SpaceX)

CAPE CANAVERAL, Fla. — SpaceX’s next cargo mission to the International Space Station (ISS) has been delayed by at least 24 hours due to poor weather conditions.

Both the Falcon 9 and the Dragon have flown before. Indeed, the capsule has two ISS missions under its belt, and will be the first Dragon to launch toward the orbiting lab three times when it finally does lift off.

According to the Air Force's 45th Space Wing Weather Squadron, there was just a 30% chance that Mother Nature would cooperate with today’s launch attempt. Will Ulrich, an official with the Weather Squadron, explained the concerns in a pre-launch press conference this morning.

"Today’s weather looks terrible," he said. "There’s a pretty unique weather pattern we have in place."

The direction of wind flow dictates where any showers and thunderstorms will go, he explained. An unusual cold front is currently draped across the southeastern United States and is driving the current steering flow. The cold front is also the reason there’s extra moisture in the area, Ulrich said.

"With an instantaneous window today, either the weather is good or it is not," he told Space.com.

Anvil clouds and cumulus clouds were a cause for concern. Therefore, weather officials closely monitored lightning, noting that area clouds could hold electrical charge for several hours. This held charge could potentially trigger lightning if a rocket were to pass through those clouds.

In addition to weather concerns at the launch site, the 45th Space Wing also has to monitor conditions downrange where the rocket is heading.

As the countdown progressed, weather conditions at the Cape deteriorated. Due to the instantaneous launch window, crews had to stand down from today’s attempt. The next launch opportunity opens tomorrow (July 25), but conditions are expected to be similar on that day, with just a 30% chance of good weather, according to Weather Squadron officials.

If the Falcon 9 cannot get off the ground tomorrow, the next attempt could come as late as Aug. 1, because of the position of the space station on orbit as well as station traffic, NASA officials have said. But SpaceX and NASA are still working on finalizing backup dates.

When Dragon does launch, it will carry approximately 5,000 lbs. (2,270 kilograms) of supplies for the station, including 2,500 lbs. (1,134 kg) of scientific research to support dozens of experiments aboard the ISS.