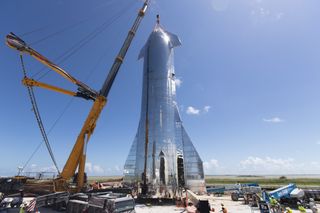 We can now take the full measure of SpaceX's latest Starship prototype.

The company has mated the top and bottom halves of the Starship Mk1 vehicle at its South Texas facilities, SpaceX founder and CEO Elon Musk said today (Sept. 27).

"Starship halves being joined," he posted on Twitter, along with a photo of the sleek silver Mk1.

The milestone comes just in time for Musk's big weekend announcement: On Saturday evening (Sept. 28), the billionaire entrepreneur will reveal the latest design of Starship and Super Heavy, the spacecraft and rocket that SpaceX is developing to help humanity settle the moon, Mars and other distant worlds.

The presentation will take place at the South Texas site, which is near the village of Boca Chica. The newly stacked Mk1 will presumably serve as a dramatic backdrop.

Musk tends to give such big updates once per year; he has done so every autumn since 2016. He also parcels out interesting design details via Twitter from time to time.

Both Starship and Super Heavy will be fully and rapidly reusable, and the duo could begin flying commercial missions as soon as 2021, SpaceX representatives have said. The first operational flights will likely launch communications satellites, but there is a crewed Starship mission on the docket for 2023 — a round-the-moon flight booked by Japanese billionaire Yusaku Maezawa.

Starship will be capable of carrying 100 passengers and will be powered by six of SpaceX's next-generation Raptor engines, Musk has said. Super Heavy, meanwhile, will feature 35 Raptors.

But those details may have changed; we'll have to wait until tomorrow's presentation tomorrow to find out.

SpaceX is working its way up to the final Starship iteration via a series of prototypes. The first test version, the single-engine Starhopper, was retired last month after acing its second and final untethered flight from Boca Chica.

The 165-foot-tall (50 meters) Mk1 is the next in line. This three-engine vehicle will initially fly to an altitude of about 12 miles (20 kilometers), perhaps as early as next month, Musk has said. The Mk1 will go into Earth orbit on future test flights, if all goes according to plan.

The outlook is similar for Starship Mk2, which SpaceX is building at its Florida facilities. The goal is to improve the final design of Starship via some competition between the two sites, Musk has said.