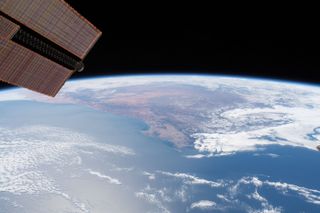 Space weather is a suite of phenomena caused by highly charged plasma that's spewed out by the sun and flung across the solar system, interacting with Earth's atmosphere and magnetic field as it passes. Such events can interfere with satellites in orbit and even interfere with power grids on Earth's surface, and scientists are still developing techniques to monitor and predict space weather trends. South Africa wants to be sure it and its neighbors aren't left out of the process.

"We could see that space weather was growing in the world and it was becoming a natural risk to technological systems," Lee-Anne McKinnell, managing director for space science at the South African National Space Agency (SANSA), told Space.com last week at the International Astronautical Congress held here. "In many ways, many African countries leapfrog into technology, so they miss all the little steps in between and they go straight there."

So far, South Africa hasn't suffered too much from the impacts of space weather, she said. Two incidents, a satellite falling silent and a burnt-out power transformer, may have been caused by space weather. But right now, the sun is relatively quiet, at a low in its 11-year activity cycle. By the next peak in that activity, South Africa will be at higher risk than it was at the most recent peak.

"We anticipate that by 2024, when the next solar maximum happens, that we're going to see a lot of impact from space weather, so we are preparing for that," McKinnell said. "In the last 10 years, the growth in technological systems and our uptake of technological systems has increased dramatically in Africa."

Space weather projects often focus on orbiting instruments, but South Africa's key strength for the issue lies in its ground-based monitoring networks, including those that detect how satellite signals change as they travel through the atmosphere and those that measure changes in the geomagnetic field. "South Africa is very good at measuring space from the ground, through a distributed network of instruments, so we want to expand that through Africa," McKinnell said. "That's what we bring to the party."

It's also important for South Africa and its neighbors to develop their own monitoring capacity, rather than rely on other countries' satellites, McKinnell said. "Space weather is a global phenomenon, but it really has regional impact," she said. "The space environment as you go across the globe is very different, so the impact that you're going to feel from space weather is very different." Local monitoring is particularly important for Africa, she said, because the magnetic equator dips through the continent, affecting its space weather.

South Africa got its start in space weather work because of its previous expertise in magnetic observations, she said, but so far, the country has been stronger in space weather science than in applications. SANSA is now working to change that with a new facility to monitor space weather around the clock and process data faster.

That transition will put South Africa in charge of a regional center focused particularly on the ways space weather impacts aviation. The country hopes that, in turn, will make its continuing reliance on technology less vulnerable and of more benefit to its residents.

"One of the things that we do in South Africa is we look at how do we utilize space for the benefit of mankind," McKinnell said. "We realized that space weather was one way of providing applications to the South African community."