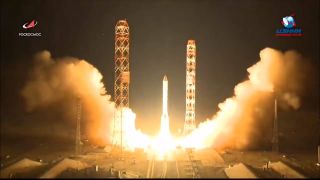 A Russian Proton-M rocket carrying the Yamal-601 communications satellite launches from Baikonur Cosmodrome on May 30, 2019. A Proton-M launched Russia’s Blagovest No. 14L satellite from Baikonur on Aug. 5, 2019.
(Image: © Roscosmos/TSENKI)

Russia just launched the fourth and final piece of its new military communications constellation, according to media reports.

The Blagovest No. 14L spacecraft took to the skies today (Aug. 5) atop a Russian Proton-M rocket with a Briz-M upper stage, which lifted off from Baikonur Cosmodrome in Kazakhstan at 5:56 p.m. EDT (2156 GMT), Russia's Tass news agency reported.

If all goes according to plan, the 6,900-lb. (3,130 kilograms) Blagovest No. 14L will make its way to geostationary orbit (GEO), 22,300 miles (35,900 kilometers) above Earth's surface. The journey will be a long and involved one; the satellite isn't scheduled to deploy from the Briz-M until about 9 hours after launch, wrote Anatoly Zak of RussianSpaceWeb.com.

The Blagovest constellation "was designed to provide military communications for the Russian Ministry of Defense," Zak wrote in an overview of the network.

The spacecraft, which have an operational lifetime of 15 years, were developed and manufactured by ISS Reshetnev and are based on the company's standard Ekspress-2000 spacecraft bus, Zak wrote. "Blagovest is a Russian religious term meaning 'good news,'" he added.

Blagovest's planners may have initially envisioned the project, which was partially declassified in 2015, providing some commercial services in addition to its military duties, Zak wrote. But some media reports claim that this possible commercial role has been dropped, he added.