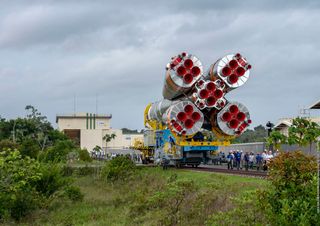 An Arianespace Soyuz rocket rolls out to the launch pad at the Guiana Space Center in French Guiana for the VS23 mission, on Dec. 12, 2019.
(Image: © Arianespace)

A sharp-eyed satellite's launch has been pushed back from its expected Thursday (March 5) launch date until no earlier than April due to a rocket problem, according to a media report.

Arianespace, which will be providing the launch from French Guiana, has not disclosed a reason for the delay. Nor did it release a new launch date for Falcon Eye 2, which is a high-performance optical observation satellite for commercial and military users in the United Arab Emirates.

"The launch vehicle and its satellite payload have been placed in stand-by mode and maintained in fully safe conditions," the European company said in a brief statement.

Media reports concerning the United Arab Emirates mission, however, point to an issue with the Fregat upper stage of the Soyuz ST-A rocket as the reason for the delay. As this is not the first issue with a Fregat, the reports suggest engineers are (out of caution) completely replacing this mission's upper stage, as opposed to trying to fix the Fregat mounted on the Soyuz ST-A rocket.

It was just six weeks ago that Falcon Eye 2 was moved from a Vega rocket launch to the Soyuz, according to SpaceNews. The Arianespace Vega line remains grounded while the company works to address a launch failure in 2019 that destroyed the Falcon Eye 1 satellite. Coincidentally, both Arianespace and satellite manufacturer Airbus Defence and Space told SpaceNews that the switch was meant to avoid delays to the mission. With Fregat now posing issues, however, Falcon Eye 2 will be sidelined for several weeks at the least, media reports suggest.

"[A] Russian industry source said that the mission was postponed until early April due to [the] customer's demand to replace [the] Fregat upper stage on the rocket, even though Russian specialists proposed to fix the problem on the current booster," said RussianSpaceWeb, which follows the Russian space industry.

Engineers plan to replace the upper stage by swapping in another Fregat meant to be used for the French Optical Space Component (CSO-2) satellite, which is scheduled to launch April 10, RussianSpaceWeb added. This procedure, however, forced Falcon Eye 2's Soyuz rocket  to return to the vehicle processing building, where it was prepared for launch.

Such procedures typically delay launches by days or weeks, since the rocket must be unhooked from connections at the launchpad, moved back to the building for processing, returned to the launchpad and then prepared again for launch. It's unclear from the RussianSpaceWeb report if CSO-2 will also be delayed, if CSO-2's Fregat is reassigned to Falcon Eye 2.

An unnamed Russian source, quoted in state news outlet TASS, also mentioned Fregat problems on Tuesday (March 5). "A problem in one of the booster's cables was revealed during the pre-launch tests of the carrier rocket's electrical equipment," the source told TASS. The media report suggested the launch would be delayed at least 24 hours.

Fregat has been troublesome in the past. For example: an ambitious Martian moon mission known as Phobos-Grunt never made it to its destination in 2011 due to a Fregat failure, instead lingering uselessly in Earth's orbit for two months before crashing back to our planet. And in 2014, two fully operational Galileo navigation satellites were stranded in the wrong orbit due to Fregat issues.

The Russian space industry has been criticized for its rate of launch failures in general. In March 2018, the website Parabolic Arc calculated that during the past 30 years, there have been an average of two failures annually of Russian launch vehicles. That October, a Soyuz MS-10 spacecraft carrying two people to the International Space Station aborted, the first such incident in more than three decades.

Analysts briefly worried about the impact on the International Space Station program since only Soyuz spacecraft can launch astronauts into space (until U.S. commercial crew vehicles are ready, which could happen in 2020.) The Russians, however, swiftly traced the problem to a deformed sensor, allowing the next launch to the International Space Station to proceed a little early, in December 2018.