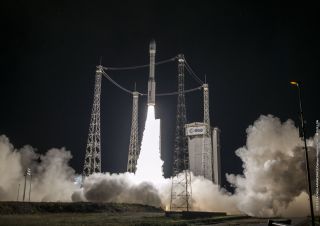 Vega is a rocket operated by Arianespace to send small spacecraft or payloads to polar and low Earth orbits. It was developed jointly by the European Space Agency and the Italian Space Agency, with assistance from other entities and has been launching since 2012. Vega is named after the brightest star in the constellation Lyra.

As of May 2018, Vega has had 11 launches — all of them successful. Its notable launches include the IXV European spaceplane, and the LISA Pathfinder mission that tested out technology to seek gravitational waves in space.

The European Space Agency plans a successor to Vega called Vega C (Consolidation), which will send up to 2,300 kilograms (5,070 lbs.) to low-Earth orbit (LEO) — 60 percent more than Vega. Its first flight is expected in 2019. Further in the future, the Vega Evolution (Vega E) is planned, which would include a more powerful liquid oxygen/liquid methane upper stage. Its first launch is scheduled for 2024.

Vega's first launch was on Feb. 13, 2012, after nine years of development. The rocket successfully launched nine satellites into orbit, including the LARES laser relativity satellite, ALMASat-1, and seven CubeSats.

On Feb. 11, 2015, Vega launched a European spaceplane, called IXV, to suborbital space. The plane passed all of its major milestones without issue, and another test flight was planned for 2019. IXV landed safely in the ocean after 100 minutes; the next mission may have a touchdown on land, using either a landing gear or a parachute-like parafoil.

Later in 2015, a Vega rocket successfully launched the LISA Pathfinder mission that December. The test spacecraft was supposed to try out technologies to observe gravitational waves from space. The mission successfully operated until July 2017, when it was shut down as planned. A successor mission called LISA will have three satellites positioned in a triangle, roughly 1.55 million miles (2.5 million kilometers) from each other, to hunt gravitational waves. It will launch in 2034.

[In Photos: Earth 'Sentinel' Satellite Blasts off on Vega Rocket]

By August 2017, Vega's track record was catching attention among space observers. "Vega now has 10 missions completed since debuting in 2012, launching successfully each time — a feat for the harrowing early days of any launch system where failures are all but expected," wrote SpaceNews.com.