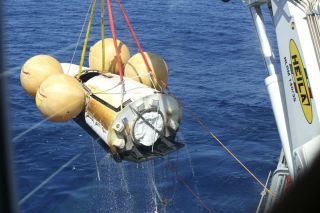 With one reportedly flawless test flight already under its belt, officials are already planning a European space plane for its next test.

The manager for the European Space Agency's shuttle-like Intermediate eXperimental Vehicle (IXV) robotic space plane is getting ready for the program's next approved flight in 2019 or 2020. IXV performed its first uncrewed space test, launching to space and then landing in the ocean 100 minutes later on Feb. 11.

Officials working with IXV are hoping to bring the space plane down on land instead of in the ocean for its next test in the coming years. To do this, they will either install a landing gear or use a parachute-like "parafoil" to set it down safely. [How the IXV Works (Infographic)]

"The idea, the main element, is to have a space plane able to have payloads that will operate in orbit, to test technology for robotic exploration and microgravity," Giorgio Tumino, ESA's project manager for IXV, told Space.com.

Meetings to figure out the next phase will begin in March, with the heavy design work starting in the summer. Meanwhile, data from the first IXV test flight will be analyzed in great detail, Tumino said, focusing on elements such as the thermal protection during re-entry.

One main goal of IXV was to figure out how to bring a spacecraft back to Earth safely in order to use it again, officials have said.

During its first flight to space, the space plane soared as high as 256 miles (412 kilometers) before splashing down in the Pacific Ocean, west of the Galapagos Islands and within sight of its recovery ship. Tumino remained at the launch site in Kourou, French Guiana to co-ordinate the 60 or so people involved in the mission.

"This mission was extremely precise," Tumino said. "We landed where we were supposed to be, and all the systems and subsystems worked perfectly," Tumino said. "I would say we are really happy about the mission result."

ESA's push to improve re-entry technologies saw another milestone this week when an Automated Transfer Vehicle (ATV) left the International Space Station loaded with sensors to track what happened as it broke up in the atmosphere.

The final flight of ATV Georges Lemaitre concluded Sunday (Feb. 15) and the data from that mission will be analyzed for future spacecraft design.

Tumino noted, however, that the "application is different" than that of IXV. "We're doing the opposite, to have the [spacecraft] return capability without burning up," he said.

Detailed results from IXV are expected to be released in about six weeks. The work is part of Europe's PRIDE (Programme for Reusable In-Orbit Demonstrator for Europe) concept, which aims to see a robotic space plane launch aboard a Vega rocket, orbit Earth and make a runway landing.