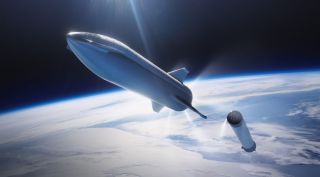 SpaceX plans to modify Launch Complex 39A at the Kennedy Space Center to host launches of its Starship vehicle and Super Heavy booster.
(Image: © SpaceX)

WASHINGTON — SpaceX plans to build facilities at the Kennedy Space Center's Launch Complex 39A for launches and, eventually, landings of its next-generation launch vehicle, according to a newly released report.

An environment assessment prepared by SpaceX, and released by NASA Aug. 1, discusses plans to develop additional facilities at LC-39A, which currently hosts Falcon 9 and Falcon Heavy launches, for use by the company's Starship vehicle and its Super Heavy booster.

The plans outlined in the document call for the construction of a new launch mount at the complex near the existing one used by the Falcon 9 and Heavy. The modifications to the pad would also include a tank farm for the methane fuel used by the Raptor engines that power Starship and Super Heavy.

Related: NASA's Launch Pad 39A, from Apollo to Shuttle to SpaceX (Gallery)

The Super Heavy booster would land at a ship in the ocean downrange from the launch site, although the report noted that SpaceX may later have the booster return to land. The Starship upper stage would initially land at the company's existing Landing Zone 1 at Cape Canaveral Air Force Station, but the company plans to build a pad near the new launch mount at LC-39A for to support Starship landings at a future date.

The facilities will be able to support up to 24 Starship/Super Heavy launches a year, the company said in the report, with a corresponding decline in Falcon launches from the complex. "Due to the higher lift capability, Starship/Super Heavy could launch more payloads and reduce the overall launch cadence when compared to Falcon 9 and Falcon Heavy," the report states.

SpaceX ruled out performing Starship/Super Heavy launches from its other two existing launch sites, Space Launch Complex 40 at Cape Canaveral and Space Launch Complex 4 at Vandenberg Air Force Base in California. The company ruled out the sites because they would require more modifications and because the Vandenberg site didn't support trajectories for the "vast majority" of missions.

"Designed by NASA to support the first human missions to the moon, Launch Complex 39A is one of the world's most capable launch sites with the infrastructure to support a wide variety of mission profiles," SpaceX said in a statement to SpaceNews about the environmental assessment. "As Starship development accelerates, SpaceX is working with our partners to continue upgrading LC-39A's infrastructure to build upon past achievements and advance new capabilities in space."

SpaceX says most of the manufacturing work for the vehicles will be done at its Hawthorne, California, headquarters. Some work could be done at the company's South Texas test site near Brownsville, Texas, as well as an industrial park in Cocoa, Florida. The company is currently building Starship prototypes at both locations.

The report doesn't give a schedule for when such missions would begin from KSC, but notes those launches would perform a wide range of missions. "Starship/Super Heavy missions would include Lunar and Mars destinations, currently not supported by any other space vehicle, increased satellite payload missions, and human spaceflight," the report states. Some launches could take place "in close succession," it added, such as "Lunar Program sending multiple payloads to resupply."

The report hinted that Starship/Super Heavy missions could also play a role in NASA's lunar exploration plans, stating that the plan to establish launch facilities at LC-39A "may support NASA in meeting the U.S. goal of near-term lunar exploration."

As SpaceX outlines its plans for eventual Starship/Super Heavy launches from Florida, the company is moving ahead with plans for continued testing of its Starhopper prototype at its South Texas test site. Road closures announced this week by county officials there suggest the next Starhopper test will take place some time between Aug. 12 and 14. Musk said after the vehicle's first free flight July 25 that the next flight would be a hop to 200 meters altitude.