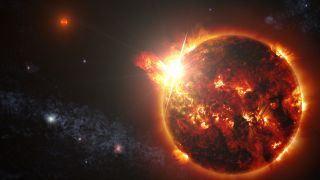 It's hard to see inside of stars, especially when they're really far away. Most astronomical observations consist of staring at literally tiny dots of light. From this, we have to try to understand how stars of all types are born, evolve, live, and eventually die.

Red dwarf stars — properly known as M Dwarfs — are especially tricky, because even though they are numerous, they are small and dim, making them that much harder to study. Theoretical models and even direct observations disagree about how big they are and how big they ought to be, but hopefully some new observations of eclipsing binary stars might give us a peek into their innards.

Related: Red Dwarfs: The Most Common and Longest-Lived Stars

The bigger they are

A star's radius is not an easy thing to predict. It depends on all sorts of factors, some of them obvious and others not so obvious. For instance, the mass of a star certainly has some sort of relationship to its radius. In general, the more massive the star, the bigger it is. But nature is much more complex than simple stories like the preceding sentence.

Really, the star's radius is determined by how hot it is in its core, and how efficiently it can dump that heat into space. If it has a really intense core, then the star has to figure out how to get all that heat from its inside to its outside. If the guts of the star are really really good at transporting heat, then that star can get away with a relatively small surface area, and hence radius. But if the star has a complicated interior, or is just generally bad at transporting heat, then to compensate, the star has to have a very large surface area. This is so it can efficiently get rid of all that heat into the cold vacuum of space.

Despite their small size, red dwarf stars have especially tricky interiors. Their cores are certainly hot enough to fuse hydrogen into helium, but the story of what goes on between that inner core and the surface is a complicated dance of high-energy plasma physics. And since we don't have a lot of red dwarf stars sitting around in laboratories, it's hard to poke and prod and dissect them to figure what exactly is going on beneath their surfaces.

Ideally, we would have a collection of stars to examine. If we can see up close exactly the temperature, metallicity, age and radius of a nice healthy sample of stars, then we could use that to tune our theoretical models and build up a solid case for the physics of those stellar interiors.

One of the only ways to get a handle on the radius of a star is through pairs of stars that happen to have just the right alignment so that they eclipse each other along our line of sight. As we watch the system, we can see the stars blink off and on as they pass in front of each other. There's even one star that you can see with the naked eye do this, called Algol. This was known as “the ghoul” to ancient astronomers because of its creepy changing brightness behavior, but to be fair they didn't know about this whole eclipsing-binary business.

As one star passes in front of the other, it affects the total light output that we see, and we can capture this with an instrument like NASA's recently deceased Kepler spacecraft. Primarily designed to hunt for exoplanets, the exact same technique can be used to study these eclipsing binaries.

Of course, it's not as clear-cut as that. All we see is the change in total brightness from the system. It takes some not-so-easy modeling to get a handle on the properties of the stars themselves, even the radius. Thankfully, astronomers are a clever bunch and can do their best to derive some decent estimates of the stellar properties from the binaries.

Did I mention that astronomers almost always disagree? That's true about everything in general, but also true about masses and radii derived from eclipsing binaries.

Some observations of red dwarf eclipsing binaries suggested that the radii of red dwarf stars were bigger than they were supposed to be according to our best theoretical models. And theorists, with nothing much better to do, started coming up with all sorts of clever mechanisms to explain this larger-than-expected radius.

To make a star bigger, there had to be a way to suppress the flow of heat from the core to the outside. Perhaps red dwarf stars have faster rotation rates, which generate strong magnetic fields — maybe even stronger than that of the sun. And strong magnetic fields can start playing games with the interiors of stars. For example, maybe they could suppress convection, making it harder for heat to flow from the inside to the outside. Or maybe they can start messing with the formation of starspots, making sure no cracks or fissures appear in the surface of the star and keeping a proverbial stellar lid on all that heat.

But more recent observations are now contradicting the earlier observations, saying that everything is just peachy — that red dwarf stars have exactly the radii that we predict, without any need for this fancy magnetic field mumbo-jumbo.

So maybe the matter is settled. But there are only four of these red dwarf eclipsing binary systems to study. That's right: four. Do these represent a fair sample of what red dwarves do in general? Or are these simply special cases? We honestly don't know.

Astronomers are trying to understand red dwarf stars because a) they are the most common kind of star, and b) because of that they are intimately linked to the history of star formation in the galaxy. But to understand star formation, we have to link our theoretical models of what's going on inside a star to the parts of the star we can actually see. And right now, it seems that both ends of that connection are having a bit of trouble. We have all sorts of models, and our observations aren't so great either.

Just another day in the astronomical office.