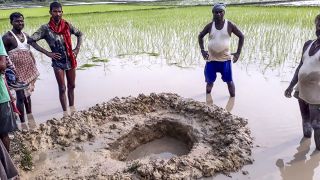 Locals crows around a crater created by the possible football-sized meteorite that fell in a rice field in the Mahadeva Village of the eastern state of Bihar in India.
(Image: © STR/AFP/Getty Images)

A small meteorite may have crashed into a rice field in eastern India on Monday (July 22).

The strange rock, which weighed nearly 29 pounds (14 kilograms) and was the size of a football, created an imprint in the muddy waters of the rice paddy in Mahadeva village in Bihar, according to CNN.

It's currently being held at the Bihar Museum but will soon be moved to the Srikrishna Science Center in Bihar, so that experts can figure out whether it's an actual meteorite or just a plain old rock, according to a statement from the Chief Minister of Bihar's office.

Our planet is bombarded every day with over 100 tons (90 metric tons) of dust and sand-size meteorites, but larger objects are rarer. About once a year, an asteroid the size of a car hits the atmosphere and creates a fireball (such as the one that raced through Canadian skies on Wednesday (July 24)), burning up before it hits the ground, according to NASA.

Every 2,000 years or so, a football-field-size meteorite hits the planet and causes major local damage. Every couple of million years or so, a truly massive object comes along with the potential to destroy all human civilization.