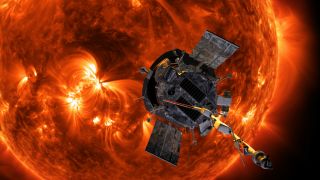 NASA's Parker Solar Probe has already completed two daring dives into the sun's atmosphere, and now scientists have realized that they'll be able to gather more data than expected from the mission.

The data bonanza stems from a particularly well-performing telecommunications system, which is letting the spacecraft phone home more often than its managers had thought it could. The extra data means that the team got its hands on information faster than expected; NASA also instructed the spacecraft to gather extra measurements on its second pass around the sun.

"All of the expected science data collected through the first and second encounters is now on the ground," Nickalaus Pinkine, Parker Solar Probe mission operations manager at Johns Hopkins University's Applied Physics Laboratory, said in a statement. "As we learned more about operating in this environment and these orbits, the team did a great job of increasing data downloads of the information gathered by the spacecraft's amazing instruments."

The increased communications operations mean that Parker Solar Probe had already sent back the 22 gigabytes of originally planned data from the first two passes by early May. Now, the spacecraft is transmitting an extra 25 gigabytes of data that its instruments gathered after the spacecraft's managers recognized the opportunity at hand.

Scientists working on the mission are already digging into the data the spacecraft has sent home to date, and the Parker Solar Probe team intends to publish it later this year. The spacecraft is also barreling toward its third flyby of the sun, which will begin on Aug. 27 for a closest approach on Sept. 1.