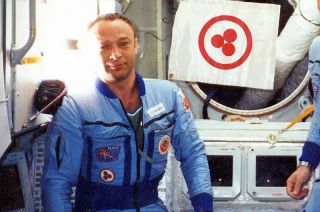 Russian cosmonaut Gennadi Manakov, who commanded two missions to the former space station Mir, has died at the age of 69.

"Gennadi Mikhailovich belonged to the generation of Soviet and Russian cosmonauts who wrote bright pages in the glorious history of the Russian human space program. He devoted his whole life to the cause of astronautics and aviation, passing on his wealth of experience to the younger generation," the space agency wrote on its website.

"The General Director of the State Corporation Roscosmos, Dmitry Rogozin, employees of the rocket and space industry, the cosmonauts of the USSR and the Russian Federation condole with the family and friends of Gennadi Mikhailovich," the statement read.

Selected to train as a cosmonaut in September 1985, Manakov logged 309 days, 21 hours and 18 minutes in space on his two missions.

Manakov's first launch was on Aug. 1, 1990. Lifting off with Gennadi Strekalov, who was making his fourth spaceflight, the two docked their Soyuz TM-10 spacecraft to the space station Mir two days later to become the seventh resident crew of the multi-module outpost.

Joining Manakov and Strekalov for the ride to orbit were four Japanese quails, one of which laid an egg enroute to Mir. The cosmonauts transferred the birds to an incubator on board the station as part of an already underway series of fertilization studies.

For 129 days, Manakov and Strekalov conducted experiments and kept the space station running, including connecting the attitude control system for a newly-added module to the rest of Mir. They also oversaw the arrival of two Progress resupply vehicles and performed a two-hour and 45-minute spacewalk in a failed attempt to repair an airlock hatch that had been damaged before their arrival.

Manakov returned to space three years later, launching with fellow cosmonaut Alexander Poleshchuk aboard Soyuz TM-16 on Jan. 24, 1993. After a two-day rendezvous, the two docked to Mir, testing a new androgynous docking unit as a precursor to U.S. space shuttles linking up with the Russian space station.

As the thirteenth resident crew on Mir, Manakov and Poleshchuk ran experiments in the fields of biology, astronomy, Earth and materials sciences. They observed the deployment of a prototype solar reflector from a departing Progress spacecraft and became the first to manually control the docking of a cargo spacecraft to Mir.

Their first EVA on April 19, 1993, prepared for the relocation of solar arrays from one module to another. The second, on June 18, 1993, completed the work they began on their first spacewalk, as well as replaced a handle for a maneuvering boom that was lost during the earlier EVA.

On July 3, 1993, Soyuz TM-17 arrived with a new two-person crew for Mir and French astronaut Jean-Pierre Haigneré, who 19 days later returned to Earth with Manakov and Poleshchuk on board Soyuz TM-16.

In total, Manakov completed 4,915 orbits of Earth and accumulated 12 hours and 43 minutes on spacewalks on his two missions.

Gennadi Mikhailovich Manakov was born on June 1, 1950, in Yefimovka in the Orenburg Oblast of Russia. He graduated from Moscow Aviation Institute and flew as a test pilot for the Soviet Air Force, leading to his selection as a cosmonaut in 1985 for the then-planned Buran space shuttle program. He was later transferred to the Star City cosmonaut group in 1988.

In addition to his two spaceflights, Manakov served as backup for the Soyuz TM-9, Soyuz TM-15 and Soyuz TM-22 commanders. He came close to flying a third mission, having been assigned to and trained for Soyuz TM-24, but issues with his heart resulted in him being grounded days before the launch in August 1996.

Manakov left the cosmonaut corps four months later, on Dec. 20, 1996. Manakov remained active with the space program though, becoming an instructor at the Gagarin Cosmonaut Training Center at Star City through his retirement in 2000.

For his service, Manakov was named a Hero of the Soviet Union and awarded the Order of Lenin, among other honors.

Manakov was married to Ludmilla Ivanovna Belaya and had two children, Yulia and Aleksei.