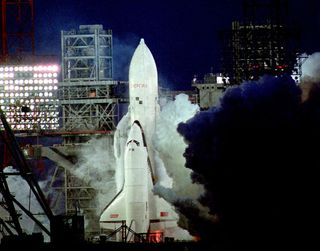 The Buran spacecraft was a space shuttle developed by the Soviet Union in response to NASA's space shuttle program. Buran, which means “snowstorm” in Russian, flew one time.

NASA's space shuttle represented a new form of development for space vehicles. Up until 1982, space vehicles — even those that carried humans — were launched for only one mission at a time, except for certain military test programs. A shuttle, on the other hand, could be used multiple times and reduce the cost of space exploration.

While the space shuttle was mostly a civilian program, in the 1980s the U.S. military used it occasionally to launch satellites and perform other classified activities. NASA's space shuttle, in fact, was designed with the military in mind; for example, its payload bay was created to be large enough for Department of Defense satellites. (This practice mostly ceased after the Challenger shuttle explosion of 1986, after which the military shifted to expendable rockets.)

NASA's focus was on reducing space costs, while the Soviet Union viewed the space shuttle as a potential military threat, wrote Anatoly Zak on his website, RussianSpaceWeb.com.

“In the USSR, the Space Shuttle was viewed first of all as a carrier of nuclear weapons,” Zak wrote in an article about the Buran. “In 1976, despite apparent skepticism in the space industry, the Soviet government decided to respond to the 'Shuttle threat' with a similar spacecraft.”

The Molniya Research Industrial Corporation, which developed the Buran's body, said the goal was to send 30 tons to space and return 20 tons to Earth.

Buran was supposed to hold up to six passengers in its crew cabin. A separate cargo department would allow for satellites up to 17 meters (56 feet) long and 4.5 meters (15 feet) in diameter. Additional crewmembers could ride in the cargo area.

Similarly to NASA's space shuttle, Buran would have different kinds of thermal materials on its surface to shield from the stresses of re-entry. Buran performed 24 test flights on Earth (including 15 that were fully automatic) in preparation for its space test flight, Molniya stated.

Buran launched only once into space, on Nov. 15, 1988, and re-entered the atmosphere after two orbits, according to NASA. The spacecraft launched aboard a Russian Energia rocket and successfully touched down under automatic control, something NASA's space shuttle was not designed to do.

Buran launched at a difficult time for the Soviet Union. Just a few years later, in 1991, the Communist government fell and the nation broke up into several countries. The program itself was put on ice because “the Soviet Ministry of Defense fully realized the lack of purpose for the system, compared to its tremendous cost,” Zak wrote.

By 1993, the head of NPO Energia (Yuri Semenov) said the project was cancelled. Molniya considered another version that would be a bit smaller, but the idea was never pursued because of a lack of investor interest, Zak added.

Just nine years later, the only Buran used in space was destroyed after the roof fell in at its storage facility at the Baikonur Cosmodrome in Kazakhstan.