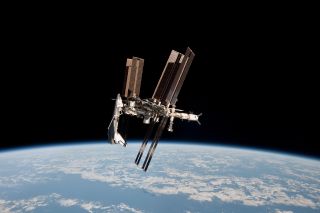 The space shuttle Endeavour and International Space Station shine front and center in this amazing (and historic) photo of the two vehicles docked together as seen from a Russian Soyuz spacecraft. Astronaut Paolo Nespoli snapped this view and others during the first-ever photo session of a shuttle docked at the space station.
(Image: © NASA)

They are photos 13 years in the making: The first-ever views of a NASA space shuttle parked at the International Space Station as seen by astronauts flying on yet another nearby spaceship.

The historic photos show the shuttle Endeavour linked to the space station as they appeared on May 23, 2011 to an astronaut on a departing Soyuz spacecraft. NASA released a set of the images today (June 7), just hours ahead of another Soyuz vehicle's launch toward the orbiting lab.

The images were taken by Italian astronaut Paolo Nespoli, a former station resident, as his Soyuz ferry  backed away from the space station last month. After undocking from the complex, Nespoli took the first-ever images from a Soyuz window as a sort of parting glance at Endeavour during the shuttle's final mission before being retired for good. [More Photos of Endeavour and Space Station]

NASA officials have said that the spacecraft "family portrait" images will serve as a reminder of the contribution that the space shuttle program has made to the construction of the International Space Station. Assembly of the $100 billion space station began in 1998 and includes the work of five different space agencies and more than a dozen countries.

The last time a NASA shuttle was photographed at a space station was in July 1995, when cosmonauts on a Soyuz snapped views of the shuttle Atlantis while it was docked at the Russian Space Station Mir. It took the photo session with Endeavour last month, more than 11 years after construction began on the International Space Station, to snap views of those two spacecraft together.

Nespoli, Russian cosmonaut Dmitry Kondratyev, and NASA astronaut Cady Coleman departed the station after wrapping up their months-long stay at the massive laboratory. They landed on the steppes of Kazakhstan after spending 159 days in space.

Endeavour and its six-astronaut crew were in the midst of a 16-day mission to the International Space Station. The STS-134 flight was the orbiter's final mission, and NASA's second-to-last shuttle flight, before the agency's 30-year space shuttle program comes to a close.

One final shuttle mission is scheduled to launch in early July – the STS-135 flight of the shuttle Atlantis.