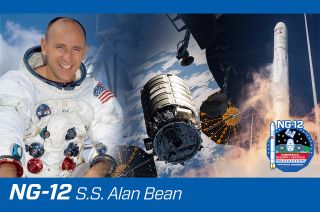 Northrop Grumman is honoring an Apollo 12 moonwalker with the naming of its 12th spacecraft to resupply the International Space Station.

The "S.S. Alan Bean," a Cygnus spacecraft, pays tribute to the late astronaut who became the fourth person to walk on the moon on Nov. 19, 1969. The capsule is scheduled to launch atop a Northrop Grumman Antares rocket from the Mid-Atlantic Regional Spaceport (MARS) at NASA's Wallops Flight Facility in Virginia on Nov. 2.

"Fifty years ago, he walked on the moon during Apollo 12. Fifty years later, we honor him on our NG-12 mission," said Frank DeMauro, vice president and general manager of Northrop Grumman's Space Systems Division, in a video statement released online on Thursday (Oct. 24). "Northrop Grumman is proud to celebrate the life of Alan Bean with the naming of our NG-12 Cygnus."

A member of NASA's third group of astronauts selected in 1963, Alan Bean flew into space twice, first as the lunar module pilot on the Apollo 12 moon landing mission and then as the commander of the second crewed expedition to the first U.S. space station, Skylab, in July 1973. In total, he logged 69 days, 15 hours and 45 minutes in space, including 31 hours and 31 minutes on the lunar surface.

Following his career as an astronaut, Bean became a celebrated artist, creating an extensive portfolio that captured what it was like for he and his fellow Apollo astronauts to explore the moon. Bean embedded in his paintings small pieces of his moon dust-stained mission patches and textured his canvases using the sole of a replica lunar boot and head of a geology hammer that he used on the moon.

"He shared the gift of exploration and inspired future generations to travel back to the moon and beyond," said DeMauro.

The tradition of naming spacecraft after astronauts and other individuals who made an impact in the aerospace industry dates back to Northrop Grumman's (then Orbital Sciences') first Cygnus launch in 2014. (Orbital Sciences and ATK merged to become Orbital ATK in 2015, which was then acquired by Northrop Grumman in 2018.)

The most recent Cygnus, which was berthed to the space station from April through August, was named the S.S. Roger Chaffee after the Apollo 1 astronaut who died in a fire on the launchpad in NASA's pursuit of the first moon landing.

"Our NG-11 Cygnus that launched in April of this year is currently in orbit conducting a long-duration, free-flying demonstration mission," said DeMauro. "A unique aspect of [the S.S. Alan Bean] mission is that for the first time, we'll be handling mission operations for two Cygnus spacecraft at the same time."

The S.S. Alan Bean is the first Cygnus spacecraft to launch under Northrop Grumman's Commercial Resupply Services-2 (CRS) contract with NASA, which provides for at least five more resupply missions delivering an additional 44,000 pounds (20,000 kg) of cargo to the space station.