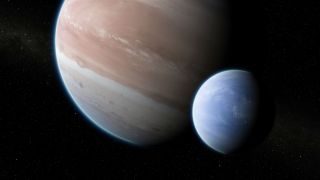 An artist’s illustration of the exoplanet Kepler-1625b with its hypothesized moon, which is thought to be about the size of Neptune.
(Image: © Dan Durda)

The first serious exomoon candidate is likely the captured core of a baby giant planet, if the exotic world does indeed exist, a new study suggests.

This was big news: If confirmed, the newfound world, known as Kepler-1625b-i, would be the first moon ever discovered beyond our solar system. But confirmation has proven difficult.

Teachey and Kipping stressed at the time that the detection, made using observations by NASA's Kepler and Hubble space telescopes, was tentative. Another research team has since argued against Kepler-1625b-i's existence, and yet another one has stressed that the data are inconclusive at this point. So, one year later, Kepler-1625b-i remains a candidate rather than a bona fide world.

That status hasn't stopped other scientists from trying to understand how the potential exomoon came to be, however. Indeed, a new study tackled that question and came up with an intriguing answer.

Astronomers think Kepler-1625b-i is about 10 times more massive than Earth, and the object appears to orbit its Jupiter-like parent planet at an average distance of 1.9 million miles (3 million kilometers).

Kepler-1625b-i therefore likely "has a mass and angular momentum far in excess of anything seen in the satellites of the solar system planets," Bradley Hansen, of UCLA's Mani L. Bhaumik Institute for Theoretical Physics, wrote in the new study, which was published online today (Oct. 2) in the journal Science Advances.

"The parameters of Kepler-1625b-i are comparable to those of planets recently discovered orbiting close to low-mass stars," Hansen wrote. "It is therefore not obvious that Kepler-1625b-i formed in a similar way to the solar system moons."

Jupiter's big moons, for example, probably coalesced from a disk of material that circled the newborn planet long ago. But modeling work suggests that Kepler-1625b-i is too big to have formed this way, Hansen said.

It's possible that the exomoon candidate is a former planet that was gravitationally captured by Kepler-1625b, which is twice as massive as Jupiter. But this doesn't seem to work, either; "all scenarios that assemble or capture Kepler-1625b-i after the host planet formed suffer from the problem that they produce moons that are either too small or too close," Hansen wrote.

His new modeling work instead suggests that the capture occurred considerably earlier, shortly after both bodies were born. The two growing objects likely occupied the same orbital neighborhood — a patch of space about one astronomical unit (AU) from the host star. (One AU is the average Earth-sun distance — about 93 million miles, or 150 million km.)

In this scenario, the planetary core that became Kepler-1625b gobbled up more gas than its neighbor, forever cementing its dominance in the relationship.

"The way that gas accretion works, it's a very strong function of mass," Hansen told Space.com.

"If you get a little bit ahead, you start to accrete a lot faster, and so it's essentially a winner-take-all situation," he added. "One of them captured all the gas in the vicinity and became the gas giant. The one that was trailing a little bit got stuck at this core stage and, because of the increased gravity [of its neighbor], got pulled down to become the satellite."

Even in this stunted state, Kepler-1625b-i would still likely have accreted so much gas that it's not a good terrestrial-planet analog, Hansen said. So, even though the potential exomoon resides in its host star's habitable zone — the range of distances where liquid water could exist on a world's surface — Kepler-1625b-i is probably not a great candidate for Earth-like life.

Elements of this scenario may have played out in our own neck of the cosmic woods, Hansen said.

For example, it's possible that Neptune and Uranus are gas-giant protocores that were born in the realm of Jupiter and Saturn. These two latter worlds got gas-gobbling head starts, the idea goes, and, rather than gravitationally capture Neptune and Uranus, booted the duo outward toward their present locales.

Indeed, this process may help explain the abundance of Neptune-mass worlds in the Milky Way galaxy, which appears to exceed that predicted by traditional planet-formation models, Hansen said.

"If we start taking into account the fact that multiple cores might be interacting in roughly the same locations, it may be that not everybody gets to be a giant planet," he said. "It may be this race against time."