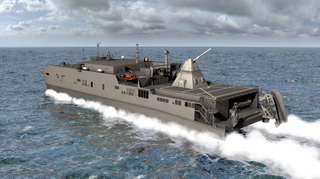 Artist’s concept of a railgun aboard a ship.
(Image: © U.S. Navy)

A new weapon could end up aiding exploration of the final frontier.

The U.S. Navy is developing an electromagnetic (EM) "railgun," which will reportedly be tested soon on a warship. That technology may have off-world implications, potentially enabling greater exploration and exploitation of the moon.

The Office of Naval Research work on the EM railgun launcher is being pursued as a long-range weapon that fires projectiles using electricity instead of chemical propellants.

Recent testing of the electromagnetic railgun under Navy auspices had the technology firing a projectile that exceeds Mach 6, approaching a velocity that hearkens back to early ideas of utilizing this machinery on the moon to hurl payloads from the lunar surface.

RELATED: The Most Dangerous Space Weapons Ever

Payloads from the moon

In 1974, Princeton University professor and space visionary Gerard O'Neill proposed use of an electromagnetic railgun to lob payloads from the moon. (The basic idea, however, may originate with sci-fi author Robert Heinlein, who laid out something similar in his 1966 novel "The Moon Is a Harsh Mistress.")

"Mass drivers" based on a coilgun design were adapted to accelerate a nonmagnetic object. One application O'Neill proposed for mass drivers: toss baseball-sized chunks of ore mined from the surface of the moon into space. Once in space, the ore could be used as raw material for building space colonies and solar-power satellites.

Given today's push for plumbing and processing ice-rich craters on the moon, could that water-ice resource shot off the moon also be part of a cislunar, fuel-making enterprise?

O'Neill worked at MIT on mass drivers, along with colleague Henry H. Kolm and a group of student volunteers to construct their first mass driver prototype.

Backed by grants from the Space Studies Institute, later prototypes improved on the mass driver concept, showing that a mass driver only 520 feet (160 meters) long could launch material off the surface of the moon.

Meanwhile, according to a story late last month in The Seattle Times, the Navy's latest Northwest Training and Testing draft Supplemental Environmental Impact Assessment explains that "the kinetic energy weapon (commonly referred to as the railgun) will be tested aboard surface vessels, firing explosive and non-explosive projectiles at air- or sea-based targets."

According to the assessment, "the system charges for two minutes and fires in less than one second," also noting that "the system is shielded so as not to affect shipboard controls and systems. The amount of electromagnetic energy released from this system is low and contained on the surface vessel."

Time will tell if this technology demonstration on Earth's oceans leads to trial runs on the "seas" of ancient lava on the moon.

You can see the Navy's railgun do its stuff in this video.

Editor's note: This story was updated at 1:30 p.m. EDT on June 5 to note that Robert Heinlein proposed use of a mass driver in his 1966 novel "The Moon Is a Harsh Mistress." In addition, the original version of this story erroneously referred to railguns as "directed-energy weapons."

Leonard David wrote the book "Moon Rush: The New Space Race," which was published last month by National Geographic. A longtime writer for Space.com, David has been reporting on the space industry for more than five decades. Follow us on Twitter @Spacedotcom or Facebook.