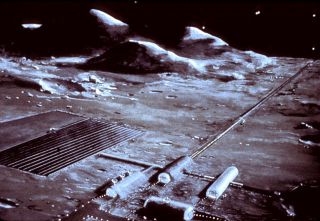 The United States Navy fired a projectile at Mach 6 during a recent test with an electromagnetic railgun, suggesting that early ideas about using such tech to launch payloads from the lunar surface might not be so sci-fi after all.

The Office of Naval Research work on the EM Railgun launcher is being pursued as a long-range weapon that fires projectiles using electricity instead of chemical propellants. [The Most Dangerous Space Weapons Ever]

In 1974, Princeton professor and space visionary Gerard O’Neill first proposed using an electromagnetic railgun to lob payloads from the moon.

"Mass drivers" based on a coilgun design could be adapted to accelerate a nonmagnetic object, O'Neill suggested. One application he proposed for mass drivers: tossing baseball-size chunks of ore mined from the surface of the moon into space, where they could be used as raw material for building space colonies and solar power satellites.

O'Neill worked at the Massachusetts Institute of Technology with Henry H. Kolm and a group of student volunteers to construct a mass driver prototype. Backed by grants from the Space Studies Institute, later prototypes improved on the concept, showing that a mass driver only 520 feet (160 meters) long could launch material off the surface of the moon.

An official at the Office of Naval Research, contacted by Inside Outer Space, said this of O'Neill's seminal work on mass drivers: "Very interesting proposal to use electromagnetic launchers for space vehicles. Considering the fact that the railgun is working with a small hypervelocity projectile, and requires significant power and thermal management, I suspect working out the details for movement of larger space vehicles/payloads is a long way off.

"But I also believe that current efforts will be successful, and electromagnetic thrust will eventually be considered for other applications, including space," the official added.

You can check out a video showing work on the U.S. Navy's EM Railgun here: http://www.youtube.com/watch?v=5imlcR0CuJ0

O'Neill, who died in 1992, founded the Space Studies Institute (SSI) in 1977 with the hope of opening the vast wealth of space to humanity. For more information on SSI’s ongoing work, go to: http://ssi.org/

Leonard David is author of "Mars: Our Future on the Red Planet," published by National Geographic. The book is a companion to the National Geographic Channel series "Mars." A longtime writer for Space.com, David has been reporting on the space industry for more than five decades. Follow us @Spacedotcom, Facebook or Google+.