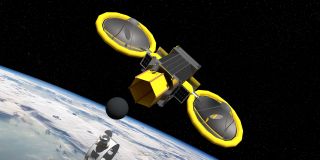 The projects come courtesy of the NASA Innovative Advanced Concepts program, which pursues theoretical ideas that could take many years to come to fruition. Each project is at the most advanced stage of development NIAC has offered to date, Phase III, and will receive up to $2 million to outline the mission concept, according to a NASA statement released on Tuesday (June 11).

"This is the first year NASA offered a NIAC Phase III opportunity, and there were many strong proposals," Jason Derleth, NIAC program executive, said in the statement. "We selected two proposals because we think both of the technologies could positively impact the industry. We are excited that these technology concepts could help humanity explore space in new ways."

The first mission concept, called Skylight, could help support NASA's push to send humans back to the moon. President Donald Trump's administration tasked the agency with landing humans on the surface again by 2024, to create a way station for future Mars exploration.

Skylight, which is led by William Whittaker, a robotics professor at Carnegie Mellon University, aspires to help future astronauts working on the moon. Using high-resolution images taken from close up, Skylight would create 3D models of craters. The models would show whether it is safe for a human (or a rover) to descend into and explore the features.

The system could also identify ice in the shadows. That capability is intriguing because would-be lunar explorers argue that water on the moon is a valuable resource for future human settlements and would reduce what astronauts need to haul from Earth.

The other project is called Mini Bee and is led by Joel Sercel, founder and CEO of TransAstra Corp. Mini Bee hopes to develop a way to mine resources from asteroids, which are full of water and minerals. The project would extract resources through a method called optical mining, which would concentrate sunlight onto the asteroid. This process would wear away the surface, and any generated debris would be collected into an inflatable bag.

The team hopes to use this process to generate propellant in space, reducing the need for astronauts to haul fuel on their missions.

The NIAC program expects to fund one Phase III study per year in the coming years, NASA said. Each study team gets two years of research time to flesh out the concept enough to transfer the idea to industry or government for further mission development and implementation.