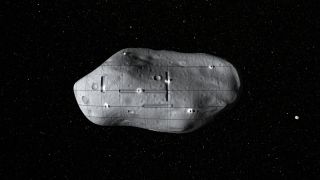 Asteroid mining could shift from sci-fi dream to world-changing reality a lot faster than you think.

Planetary Resources deployed its first spacecraft from the International Space Station last month, and the Washington-based asteroid-mining company aims to launch a series of increasingly ambitious and capable probes over the next few years.

The goal is to begin transforming asteroid water into rocket fuel within a decade, and eventually to harvest valuable and useful platinum-group metals from space rocks. [Asteroid Mining: Planetary Resources' Plan in Pictures]

"We have every expectation that delivering water from asteroids and creating an in-space refueling economy is something that we'll see in the next 10 years — even in the first half of the 2020s," said Chris Lewicki, Planetary Resources president and chief engineer Chris Lewicki.

"After that, I think it's going to be how the market develops," Lewicki told Space.com, referring to the timeline for going after asteroid metals.

Exploiting the resources of space

Planetary Resources and another company, Deep Space Industries, aim to help humanity extend its footprint out into the solar system by tapping asteroid resources. (Both outfits also hope to make a tidy profit along the way, of course.)

This ambitious plan begins with water, which is plentiful in a type of space rock known as carbonaceous chondrites. Asteroid-derived water could do far more than simply slake astronauts' thirst, mining advocates say; it could also help shield them from dangerous radiation and, when split into its constituent hydrogen and oxygen, allow voyaging spaceships to fill up their fuel tanks on the go.

The technology to detect and extract asteroid water is not particularly challenging or expensive to implement, Lewicki said. Scientific spacecraft routinely identify the substance on celestial bodies, and getting water out of an asteroid could simply involve bagging up the space rock and letting the sun heat it up.

Carbonaceous chondrites also commonly contain metals such as iron, nickel and cobalt, so targeting these asteroids could allow miners to start building things off  Earth as well. That's the logical next step beyond exploiting water, Lewicki said.

The "gold at the end of the rainbow," he added, is the extraction and exploitation of platinum-group metals, which are rare here on Earth but are extremely important in the manufacture of electronics and other high-tech goods.

"Ultimately, what we want to do is create a space-based business that is an economic engine that really opens up space to the rest of the economy," Lewicki said.

Developing off-Earth resources should have the effect of opening up the final frontier, he added.

"Every frontier that we've opened up on planet Earth has either been in the pursuit of resources, or we've been able to stay in that frontier because of the local resources that were available to us," Lewicki said. "There's no reason to think that space will be any different."

A series of asteroid-mining probes

Incidentally, the "R" in "Arkyd-3R" stands for "reflight." The first version of the probe was destroyed when Orbital ATK's Antares rocket exploded in October 2014; the 3R made it to the space station aboard SpaceX's robotic Dragon cargo capsule in April. [Antares Rocket Explosion in Pictures]

Planetary Resources is now working on its next spacecraft, which is a 6U cubesat called Arkyd-6. (One "U," or "unit," is the basic cubesat building block — a cube measuring 4 inches, or 10 centimeters, on a side. The Arkyd-3R is a 3U cubesat.)

The Arkyd-6, which is scheduled to launch to orbit in December aboard SpaceX's Falcon 9 rocket, features advanced avionics and electronics, as well as a "selfie cam" that was funded by a wildly successful Kickstarter project several years ago. The cubesat will also carry an instrument designed to detect water and water-bearing minerals, Lewicki said.

The next step is the Arkyd 100, which is twice as big as the Arkyd-6 and will hunt for potential mining targets from low-Earth orbit. Planetary Resources aims to launch the Arkyd-100 in late 2016, Lewicki said.

After the Arkyd 100 will come the Arkyd 200 and Arkyd 300 probes. These latter two spacecraft, also known as "interceptors" and "rendezvous prospectors," respectively, will be capable of performing up-close inspections of promising near-Earth asteroids in deep space.

"It is an ambitious schedule," he said. But such rapid progress is feasible, he added, because each new entrant in the Arkyd series builds off technology that has already been demonstrated — and because Planetary Resources is building almost everything in-house.

"When something doesn't work so well, we don't have a vendor to blame — we have ourselves," Lewicki said. "But we also don't have to work across a contractural interface and NDAs [non-disclosure agreements] and those sorts of things, so that we can really find a problem with a design within a week or two and fix it and move forward."

For its part, Deep Space Industries is also designing and building spacecraft and aims to launch its first resource-harvesting mission before 2020, company representatives have said.

Extracting and selling asteroid resources is in full compliance with the Outer Space Treaty of 1967, Lewicki said.

But there's still some confusion in the wider world about the nascent industry and the rights of its players, so he's happy that the U.S. Congress is taking up the asteroid-mining issue. (The House of Representatives recently passed a bill recognizing asteroid miners' property rights, and the Senate is currently considering the legislation as well.)

"I think it's more of a protection issue than it is an actual legal issue," Lewicki said. "From a lawyer's interpretation, I think the landscape is clear enough. But from an international aspect, and some investors — I think they would like to see more certainty."