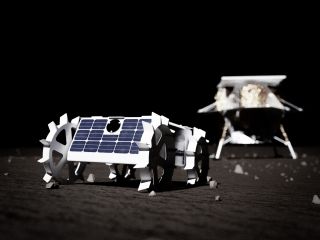 Among the 14 companies NASA has selected as partners in working toward exploration of the moon and Mars is Astrobotic, which wants to build a CubeRover.
(Image: © Astrobotic/Carnegie Mellon University)

NASA is funding more than a dozen technology projects that could aid exploration of the moon and Mars, focusing on issues including cryogenics, energy production and independent mobility.

The agency selected 14 U.S. companies to receive a total of $43.2 million, with individual allotments ranging from $1.3 million to $10 million. Each company submitted a proposal to NASA's Tipping Point program. The funding comes from NASA's Artemis program, a push to land humans on the moon by 2024.

"These are important technologies necessary for sustained exploration of the moon and Mars," Jim Reuter, associate administrator of NASA's Space Technology Mission Directorate, said in a statement. "These promising technologies are at a 'tipping point' in their development, meaning NASA's investment is likely the extra push a company needs to significantly mature a capability."

The largest chunk of money, $10 million, went to Blue Origin to support a project focusing on cryogenic technology. Specifically, the company wants to test out a new way of cooling hydrogen and oxygen into liquid fuel, then storing that product before launch. Blue Origin hopes to eventually design a system for producing fuel on the moon based on this technology; earlier this year, the company laid out its vision for a lunar lander dubbed Blue Moon.

The other 13 projects all received half the funding of the Blue Origin project. A few current NASA partners are also represented in the awards, including SpaceX, which has worked with NASA for years on cargo deliveries to the International Space Station and is developing crew-transport capability. Other such partners include Astrobotic and Intuitive Machines, both of which NASA has contracted to carry its first landed science instruments to the moon, on flights targeted for 2021.

The NASA money will be doled out over three years and does come with strings attached: The companies need to meet certain goals and must fund a proportion of the project independently of the agency.