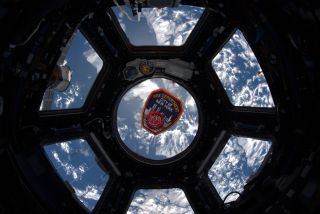 A New York City Fire Department patch floats in the Cupola window of the International Space Station on the 18th anniversary of the 9/11 terror attacks.
(Image: © NASA)

On the 18th anniversary of the 9/11 terror attacks, NASA astronauts paid tribute to the heroes who risked their lives to save others on that day by tweeting a special message from space.

"Honoring the brave public servants of @FDNY. Thank you for your service, we remember your fallen comrades," NASA's Expedition 60 astronaut Drew Morgan tweeted from the International Space Station. "Your flag and patch are proudly orbiting the Earth on board the @Space_Station! #NeverForget."

Morgan shared photos of a New York City Fire Department (FDNY) patch floating in the Cupola window with a view of Earth in the background, as well as a photo of himself with an FDNY flag mounted inside the orbiting laboratory.

Video: Astronaut Shares What 9/11 Looked Like from Space
Related: 9/11 Remembered in Space Photos

Honoring the brave public servants of @FDNY. Thank you for your service, we remember your fallen comrades. Your flag and patch are proudly orbiting the Earth on board the @Space_Station! #NeverForget pic.twitter.com/zxrNRmffsPSeptember 11, 2019

NASA also commemorated the somber anniversary from down on Earth by sharing a recent photo of Manhattan captured from space. NASA astronaut Christina Koch captured the photo below from the International Space Station as it passed over the area on Aug. 19, 2019.

"Each year, we pause and never forget," NASA officials said in a statement. "Beyond remembering and honoring the Americans who died that day, NASA also assisted FEMA in New York in the days afterward, and remembered the victims by providing flags flown aboard the Space Shuttle to their families."