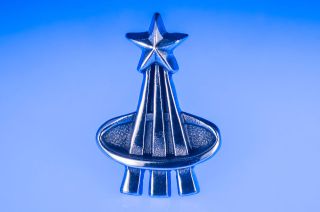 NASA's silver astronaut pin has been worn by astronauts who were qualified for spaceflight assignments since late 1963.
(Image: © NASA)

They have completed their basic training and have qualified for mission assignments, but before NASA's newest group of space men and women can call themselves astronauts, they need one more thing — a small lapel pin with a long history.

NASA will graduate its 22nd astronaut candidate class on Friday (Jan. 10). The 11 American and two Canadian trainees will each receive an astronaut pin, signifying their eligibility for future flights to the International Space Station, Artemis missions to the moon and, perhaps, journeys to Mars.

"Forget caps and gowns. They'll get spacesuits," wrote NASA about the ceremony to be held at Johnson Space Center in Houston.

The candidates' "diplomas" — the silver, star-tipped pins — are part of a tradition that dates back almost 60 years.

NASA's first astronauts, the Mercury 7, were the first receive and adopt pins as a symbol of their status.

As test pilots, the Mercury astronauts earned their wings from their respective branches of the U.S. military. On Dec. 6, 1961, Alan Shepard and Virgil "Gus" Grissom, the first Americans to fly into space, were presented with the U.S. Navy's and U.S. Air Force's first astronaut wings, respectively, at a joint ceremony held at the Pentagon.

The wings resembled the two branches' aviator badges, but were modified with a device at their center featuring a five-pointed star with three trailing rays passing through a halo.

For their civilian wear (i.e. business suits), the Mercury astronauts wore a pin that merged the symbol for the planet Mercury with the Arabic numeral "7." As NASA's human spaceflight program expanded, though, a new pin was needed.

"NASA's twenty-nine astronauts are wearing a new emblem, unofficially signifying the unity of the Mercury-Gemini-Apollo flight teams," read the May 13, 1964, issue of Space News Roundup, the newspaper of NASA's Manned Spacecraft Center (today, Johnson Space Center). "The design shows a trio of trajectories merging in infinite space, capped by a bright shining star and encircled by an elliptical wreath denoting orbital flight."

The new astronaut pin, which borrowed its design from the military badge, was chosen by the astronauts themselves at a get together organized by Mercury (and later Gemini and Apollo) pilot Wally Schirra.

A silver version of the lapel pin, like the type being presented to the Group 22 candidates on Friday, denoted the competition of basic training. Astronauts earn their gold pin by flying into space.

The astronaut pin has come to represent the astronaut corps and, as such, has been incorporated into another of the crew members' adornments, their mission patches.

The Apollo 14 crew was the first to add the symbol to their moon landing mission insignia in 1971. That was followed by more than two dozen patches representing space shuttle missions, including the first and last flights with a seven-person crew (STS-41G in 1984 and STS-131 in 2010), the first Hubble Space Telescope servicing mission (STS-61 in 1993) and the ill-fated final flight of shuttle Columbia (STS-107 in 2003). Several International Space Station crews have also used the symbol on their embroidered emblems.

The patches, though, are not the only way the pins have flown in space. Gold pin presentation ceremonies have been held in orbit and two of the physical silver astronaut pins are on the moon today.

Alan Bean, the fourth person to walk on the moon, was responsible for leaving the two pins on the lunar surface: one belonging to the late Clifton "CC" Williams, who Bean replaced on the 1969 Apollo 12 crew, and his own.

"It'll be there for millions and millions of years," Bean wrote of his own silver pin, "or until some tourist finds it and brings it back to Earth."

The pin's design has remained largely unchanged since its adoption in 1963, with one notable exception. Deke Slayton, one of the original astronauts who was medically grounded before he could fly a Mercury mission, was presented with a special, diamond-enhanced pin.

Slayton's gold and diamond pin, which today is on display at The Museum of Flight in Seattle, was a gift from the first Apollo crew, including fellow Mercury pilot (and first astronaut wings recipient) Gus Grissom, who tragically died in a 1967 fire on the launch pad. Presented to Slayton by the Apollo 1 crew's wives, the pin was then flown to the moon by Apollo 11 commander Neil Armstrong.

Slayton later earned his own (normal) gold astronaut pin as a crew member on the 1975 Apollo-Soyuz Test Project, but continued wearing the diamond-studded pin.