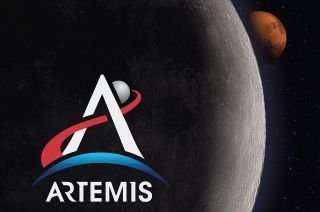 NASA’s new Artemis program logo was revealed on the eve of the 50th anniversary of the Apollo 11 first moon landing.
(Image: © NASA)

Fifty years after Project Apollo landed the first astronauts on the moon, NASA is drawing inspiration — and a new insignia — from its historic lunar program.

The space agency on Friday (July 19) revealed the logo for Artemis, its next effort to return Americans to the moon and send the first humans to Mars. The new logo incorporates the stylized "A" from the Apollo program logo.

"Today, I am proud to share with you for the very first time the Artemis logo. This is the image of exploration that will carry us as we once again send humans beyond low Earth orbit," said Jim Bridenstine, NASA's Administrator, at the close of a two-hour NASA Television special dedicated to celebrating "NASA's Giant Leaps: Past and Future" on the eve of the 50th anniversary of the Apollo 11 first moon landing.

Named after the mythological Greek goddess of the moon who was also the twin sister of Apollo, the Artemis program is aimed at landing the next American and the first woman on the moon by 2024. The Artemis logo is intended to pay tribute to the past while establishing a new direction for future missions.

"This new identity draws inspiration from the Apollo program logo and mission patch," reads a NASA statement issued on Friday. "Using an 'A' as the primary visual and a trajectory from Earth to the moon, we honor all that the Apollo program achieved. However, through Artemis we will forge our own path, pursue lunar exploration like never before and pave the way to Mars."

Like many NASA emblems, the Artemis logo is replete with symbolism, beginning with the names of its colors: Earth Blue, Rocket Red and Lunar Silver.

The "A," in addition to referencing the Apollo logo, represents an arrowhead from the goddess Artemis' quiver and is intended to symbolize launch. The tip of the "A" extends beyond the moon, signifying that NASA's lunar efforts are not an end, but rather the preparation for what lies beyond.

The crescent Earth at the bottom of the logo depicts missions from humanity's perspective. "From Earth we go. Back to Earth all that we learn and develop will return," wrote NASA. This crescent also illustrates Artemis' bow as the source from which all energy and effort is sent.

The trajectory is drawn from left to right through the crossbar of the 'A' opposite that of the Apollo program logo, highlighting the distinct differences in NASA's return to the moon. Further, the trajectory is red to symbolize the path to Mars.

Finally, the moon is included as NASA's next destination and a stepping stone for Mars. "It is the focus of all Artemis efforts," explained the space agency.

The original Apollo program logo, adopted in 1965, used drawings of the moon and Earth linked by a double trajectory to portray President John F. Kennedy's goal of "putting a man on the moon and returning him safely to the Earth" by the end of the 1960s. The emblem was a composite design derived from the ideas of NASA employees and contractor personnel. It featured the constellation Orion overlaid on a capital letter "A," such that the three stars that form Orion's belt also served as the bar in the initial for Apollo.

The first Artemis mission, previously known as Exploration Mission-1, has had its own mission patch since December 2017. The Artemis-1 emblem features the Space Launch System (SLS) rocket making its maiden flight and uses similar red, blue and silver colors as in the new Artemis logo.

Click through to collectSPACE to see the animated version of NASA’s new Artemis logo.