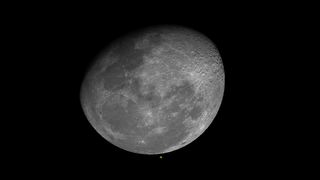 This sky chart shows the view from Cape Town, South Africa when the moon occults Saturn on May 22, 2019.
(Image: © SkySafari app)

The moon will make a close pass to Saturn this evening (May 22), so close that our natural satellite will block the view of the ringed planet for skywatchers in parts of the world.

In parts of southern Africa and Antarctica, skywatchers will see Saturn play "peekaboo" with the moon. Elsewhere in the world, the two celestial bodies will appear about one-third of a degree apart at 6:14 p.m. EDT (2214 GMT). At that time, Saturn and the moon will be in conjunction, meaning that they will share the same celestial longitude.

Depending on where you are, you may have to wait until Thursday morning to see the pair together. Across the U.S., Saturn and the moon will be below the horizon at the time of their closest approach, and they won't be visible until after midnight. If you'd rather not stay up late, you can still catch them in the morning before sunrise, when they will be higher in the sky and just slightly farther apart than they were during the conjunction.

For a small portion of the Southern Hemisphere, tonight's conjunction will also bring a lunar occultation, or the aforementioned game of celestial "peekaboo." The occultation will be visible from South Africa, Namibia, Lesotho and Antarctica, as well as a few remote islands in the Indian Ocean. For eastern Australia and New Zealand, the occultation will happen around the time that the moon is setting and the sun is rising on Thursday (May 23), so viewing prospects there are not ideal.

In Cape Town, South Africa, Saturn will disappear behind the moon's edge at 10:18 p.m. local time (2018 GMT), and the planet will reappear at 11:11 p.m. local time (2111 GMT). You can find a timetable and a visibility map for this occultation (and others) at lunar-occultations.com.